If you think the Murciélago looks dramatic, try driving one. Epic pace and a mighty V12 await those with pockets deep enough
Open gallery
Close

The Murciélago had a tough job on its hands. Not only did it replace the Diablo, the 11-year old icon of 1990s excess, but it was also the first new Lamborghini launched under the brand’s Audi/ Volkswagen Group ownership. Could the Germans keep the Italian fizz and inject much-needed quality control?

They could. The Murciélago was one of the finest cars to have made it out of Sant’Agata up to that point. We said it was “just about the sexiest car on the planet” in our 2005 review. The Murciélago of 2001 to 2010 joined Lamborghini as its flagship, with a mid-mounted V12 and all- wheel drive.

Much of Lamborghini’s delightful lunacy had been retained: the car featured scissor doors and a wide, dramatic-looking body that sat just 1.2m above the ground at its highest point. Aerodynamics and cooling were improved by the use of an active rear wing and active air intakes. The 6.2-litre V12, adapted from the Diablo’s, provided further drama in the form of 572bhp, 479lb ft and a magnificent soundtrack.

The Murciélago could hit 62mph from rest in just 3.6sec and reach 205mph. Gear changes were delivered through a six-speed manual transmission, and the four- wheel drive system sent 70% of the power to the rear by default. Our testers praised the model’s power delivery, superb traction, emphatic body control and modern technology. 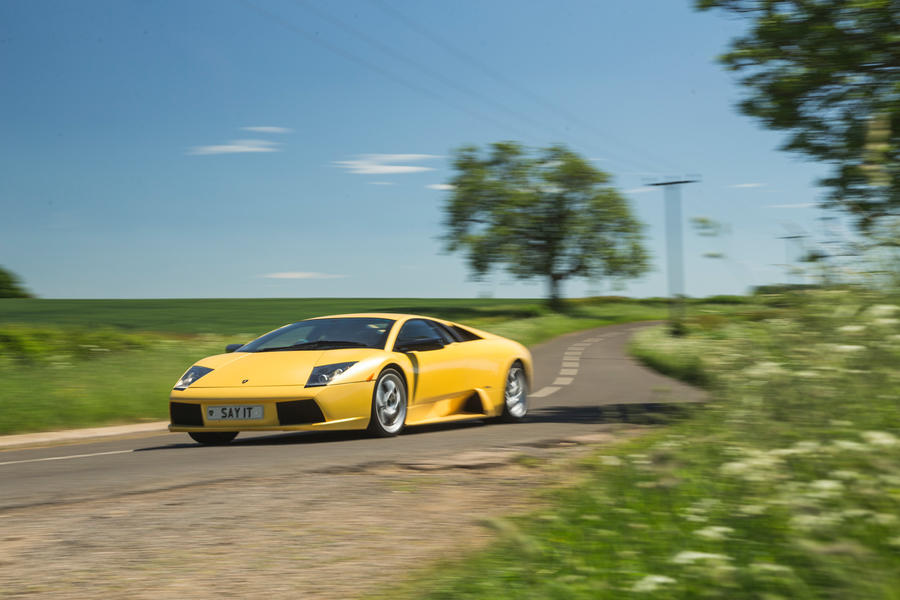 A roadster joined the range in 2004, with a manually detached soft top that could be stored in a front compartment. Along with a reinforced chassis, the soft-top Murciélago had adapted rear pillars and a new engine cover, which together added 29kg to the kerb weight, and 0-62mph took 3.8sec. Audi’s influence could be seen in an interior that was far more refined than those of previous Lamborghinis. The driving position was good and there was a high-quality dashboard, climate control and leather seats.

The Murciélago was facelifted in 2006, when it gained a 631bhp 6.5-litre V12, reducing its 0-62mph time to 3.4sec and raising the top speed to 211mph. Design changes were substantial, notably the more sculptural grille and asymmetrical side air intakes. It also gainedan upgraded automated manual gearbox – a six-speed e-Gear system, first introduced in 2004. Inside, there was a new speaker system and improved head room courtesy of revised seating. To top it off, the ‘LP 640’ suffix was added to its name.

Lamborghini upped the ante for the Murciélago’s final variant: the hardcore LP 670-4 SuperVeloce, costing an eye-watering £265,937. Just 350 were produced. The 6.5-litre V12 was ramped up to 660bhp, enabling 0-62mph in 3.2sec and 212mph. Extensive use of carbonfibre helped shed 100kg and a larger wing could be fitted with the Aero Pack for extreme, track-focused intent. Understeer was reduced, body control was improved and it was, of course, blisteringly fast.

In total, Lamborghini made 4099 Murciélagos, but there are plenty on the market. It was priced at £175,000 when the car first arrived in the UK, and time has been kind to it. Today, prices start at around £130,000, but some cars have maintained their value, and others with low mileages have risen in price. But no matter what they cost in future, one constant will endure: no Murciélago has ever been, or ever will be, cheap to run. 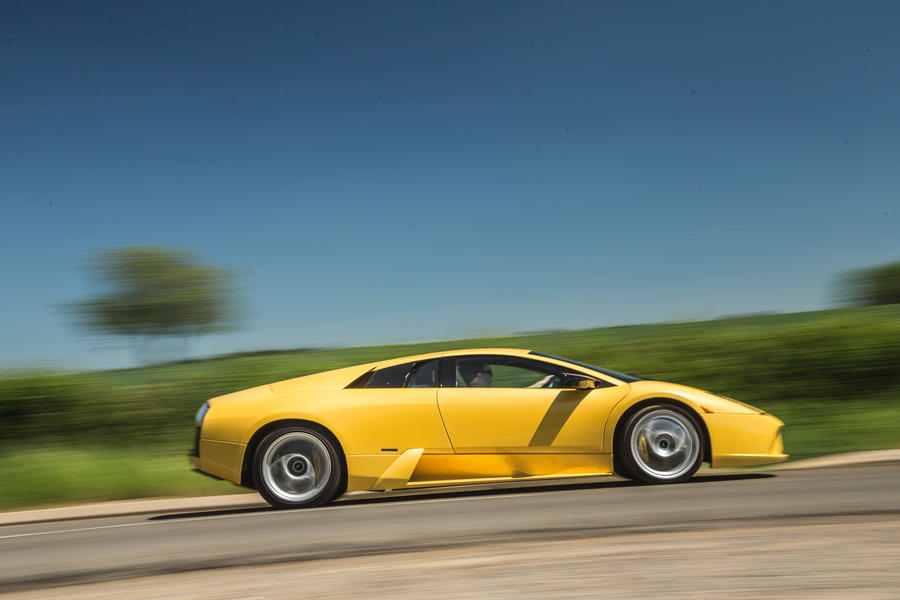 “I’ve got a manual LP 640. The Murciélago stood out to me over a Ferrari or an Audi R8 because of how savage it looks, but it’s also quite beautiful. You can’t go wrong with that V12. It’s one of the best-sounding cars even to this day. I’m not usually a fan of convertibles but the roadster made sense as I wanted to get a constant earful of that noise, and it’s still ridiculously quick. If I had to highlight any issues it would be that the roof is a pain to remove and put back on again, which in England is risky at best. An owner I know also had problems with the e-Gear system. They convinced me to go for a full manual.”

Bodywork: Look out for stone chips, scrapes and scratches: the Murciélago sits low and isjustovertwometreswide.Checkfor rust at the bottom of the scissor doors.

Brakes: Brakes wear quickly when driven hard so see if the car has been used on track. Check for corrosion on discs and pads – replacements are expensive. Carbon-ceramicbrakesonlater models are less prone to wear. Brake fluid should be changed every year.

Engine: Valve timing problems crop up: the V12 misfires or won’t turn over. Engines should be serviced every 7500 miles or annually. Some say the engine drinks a litre of oil per 1000 miles.

Roof: The roadster’s roof is frustrating to dismantle and erect due to its tubular rigging. Worth bearing in mind if you’re torn between coupé and drop-top.

Transmission: The e-Gear system suffers on inclines when regulating clutch engagement and throttle input, resulting in clutch wear and burn. Reversing on inclines can also cause problems. Owners say the clutch wears a lot quicker than the standard manual’s. Replacement (it’s an engine-out job) can cost £5000. Another issue is failure of the system’s mechanical actuator, noticeable as the car will be unable to shift into gear. Budget £15,000 for replacement. Software updates implemented from 2009 improved e-Gear reliability.

Servicing costs can ramp up. Luxury car dealer HR Owen offers an annual service from £1145. Its major service starts from £4300, including a replacement air filter, new spark plugs and new gearbox oil. Another firm, Bolton-based Supercar Clinic, provides annual servicing from £650, rising to £1400 for a major service. It pays to do your research before diving in. 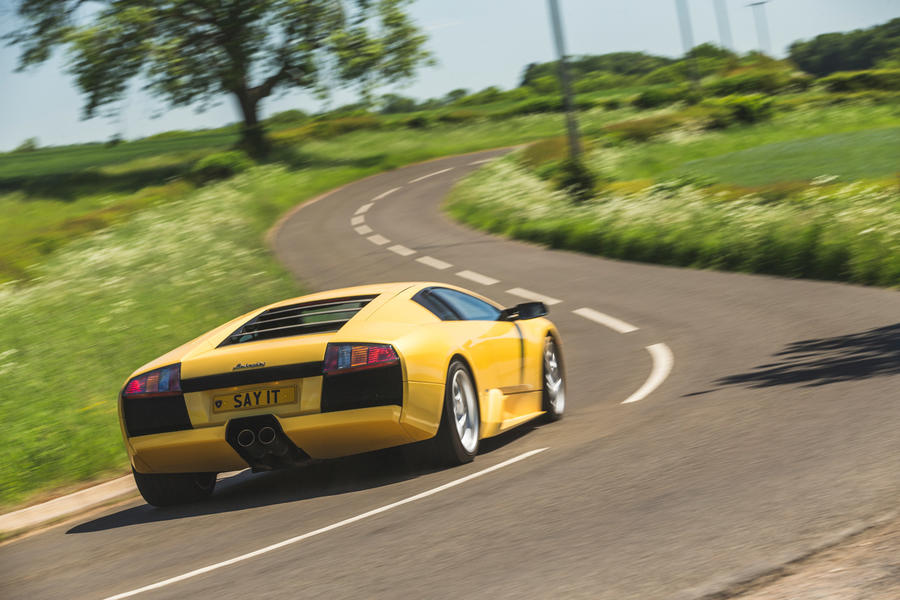 Lamborghini Murcielago 6.2 4WD, 2007, 19,850 MILES, £160,000: One of the less expensive Murciélagos, and being sold privately. It comes with a full history and has had five owners. Its service records indicate it has done less than 750 miles since 2017. The bodywork and interior appear to be in great nick, judging from the photos.

You can simulate owning an e-drive Murcielago - by standing next to the A14 waiting for a resuce truck and ripping up £50 notes as fast as you can.....

I get paid more than $90 to $100 per hour for working online. I heard about this job 3 months ago and after joining this I have earned easily $10k from this without having online working skills . Simply give it a shot on