From £16,4458
Refreshed SUV for budget buyers is tested in its bread-and-butter configuration
Open gallery
Close

Lateral-flow tests every five minutes, an app for almost everything and an online account with a password you can’t remember for everything else; cars that try to drive for you and are overflowing with needless technology. If you too feel overwhelmed by the complexity of modern life, try a car from Dacia, which has always predicated its brand upon a disdain for superfluity and in so doing found itself a great customer base – even fan base – in Britain.

Along with introducing a genuinely outstanding new Dacia Sandero supermini, Romanian Renault has also updated its Duster SUV for 2022, sharpening its look and refreshing its interior. The mechanicals have been left essentially unchanged, presumably by the rationale that, well, they were just fine as they were. It didn’t get four stars from Autocar in 2018 for nothing.

Each unit has been ‘renewed’ to reduce CO2 emissions, lowering your company car tax bill and/or environmental guilt, while a new tyre compound contributes a further 10% cut.

Interestingly, you can no longer buy a petrol 4x4 Duster, only a diesel one. All petrol Dusters are now front-wheel drive. And if we’re going along with Dacia’s brand ethos, that makes sense: eight in 10 Brits live in an urban area and therefore don’t strictly need 4WD, which adds cost and weight.

We’ve already driven the diesel 4x4 and the EDC, so now it’s the turn of the bread-and-butter Duster. The one that matters most: the 1.3 TCe. Here, there are just two trim levels, Comfort and Prestige, of which we’re sensibly testing the former. 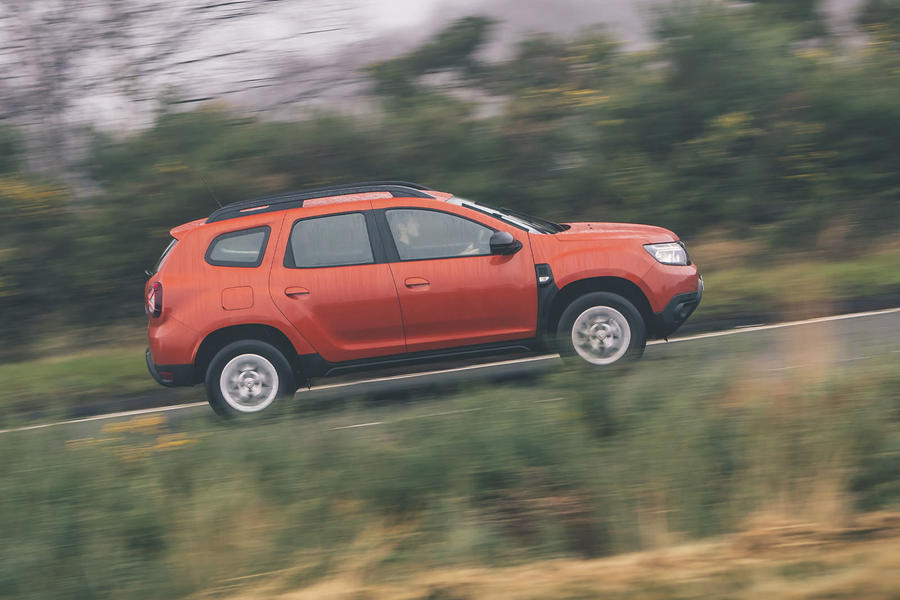 The facelift’s changes are focused on the interior and immediately noticeable. The central infotainment touchscreen is new and this is made clear by its smarter appearance, which is thanks to it being an inch larger, of higher resolution and using upgraded software.

It works just fine and feels nicer to the touch, and the touch-sensitive shortcut icons on its border are a welcome addition, although it would be even better if they were physical buttons. (Thankfully, Dacia has kept this type of control for the simple dials below that control the air conditioning.)

The software is easy to navigate and even includes Apple CarPlay and Android Auto (albeit only when your phone is plugged into one of the two USB ports fore of the gearstick – an infinitely better location than above the screen, as previously). And the screen displays couldn’t be simpler; just take the music player, which presents the track and artist names in large white writing against a black background, above skip and pause buttons. By contrast, the touchscreens in some modern cars make you feel like you’re sitting at a NASA ground control terminal.

Other improvements to the cabin include a centre console with a retracting armrest, which is a real boon for long-distance driving, and new upholstery, which is, er, still black cloth.

The steering wheel is wrapped in a pleasantly smooth material (Dacia lists it as ‘soft feel’, whatever that means) but the dashboard plastic looks about as nice as it is to touch, which is to say not particularly. It’s very 2005 Renault Clio in here, which is perhaps unsurprising, seeing as that’s precisely to where you can trace the Duster’s fundamental mechanical origins.

Therefore it’s entirely inoffensive to drive. The ride is much softer and comfortable than you can expect from most cars today. The suspension (MacPherson struts up front and an old-school torsion beam at the rear) combines with tall tyre sidewalls on the 16in alloys to produce a very relaxed demeanour at any speed, although it can get a bit unsettled over scruffy surfaces.

The light steering is just about accurate enough and not as vague as you might expect, and you would have to be behaving like a bit of a spanner to test the limits of grip – signalled to you by the considerable roll allowed by the soft springing.

The 1.3-litre engine gives an unexpected turn of a pace, ready to sprint past slow-moving traffic if you shift through the gears quickly enough, and fairly flexible as well, not wanting for torque up high. It makes more sense when you learn that this same unit is also deployed in the Mercedes-Benz A-Class (yes, really).

The gearshift is admittedly somewhat stiff, but we reckon that’s better than it feeling lame, like in the rival Citroën C3 Aircross.

We did have one cause for concern as the clutch pedal kept getting stuck in when we first received the Duster, but this issue stopped after five minutes or so and has not recurred. 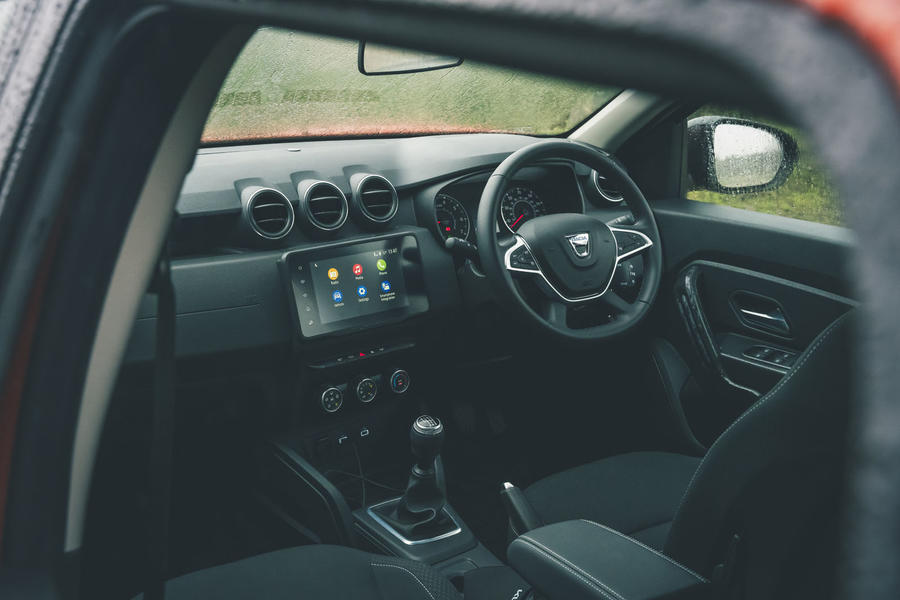 The Duster continues to offer a very acceptable proposition to families on a budget – and an even more welcome antidote to the suffocating complexity of modernity.

It’s a handsome (rather than aggressive) SUV with a petrol engine, a manual gearbox, front driveshafts, five seats, a spacious boot and a touchscreen for your music and phone, and that’s pretty much all. Far from that being an indictment, that’s something to treasure while we still can. And all for what, £16,845? That’s cheaper than a decent Ford Fiesta these days. 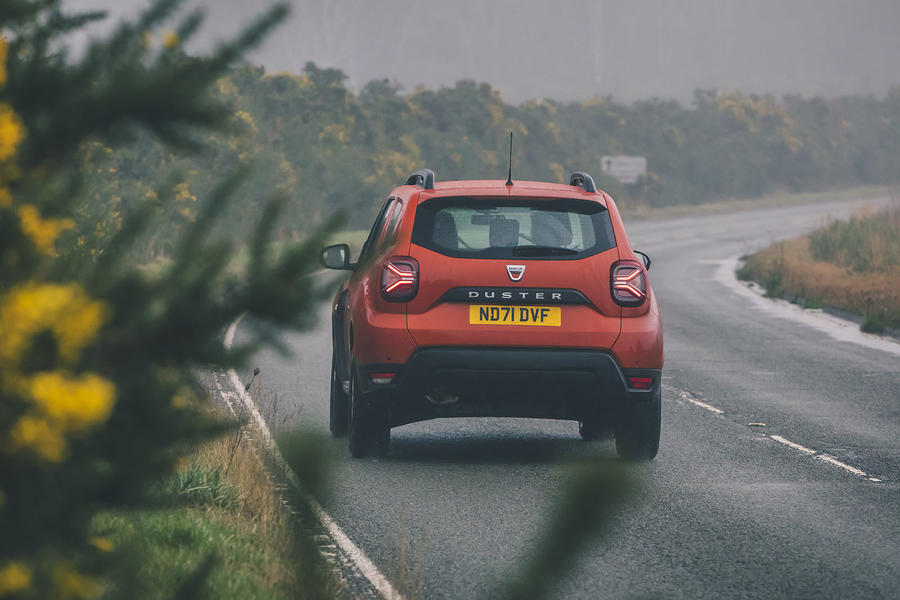 What's the point of that xxxx nick? Confusing for many, disturbing to some. Nomenclature prevalent in afterlife? Metaverse persona? Other than that: The Duster is a brilliant 4x2

What's the point of 4 x2 in the tag lines, is it to fool people into thinking it's 4wd as it has a 4 in it. Maybe the 2 could be the rating it got in safety tests

I never take any notice of the price Autocar put at the top of articles as they are so often wrong. There again as most of us access their content for free do we have any right to complain?

This is still a good (fairly) low budget option but whoever came up with that Don't Worry Be Duster tagline in the latest tv ad should hang their head in shame. Terrible!