Contrary to appearances, what you’re looking at is not an original short-wheelbase Ferrari 250 GT California Spyder. If it were, it would be one of around 56 cars ever made and, depending on condition and provenance, worth upwards of £15 million.

It is in fact a brand-new car created by Ferrari experts GTO Engineering. Externally, it is apparently indistinguishable from the original. Internally? Well, that’s rather up to you.

Because so long as you don’t mind a two-year wait, GTO will supply you with a California Spyder Revival for around one-20th of the price of the real thing: £750,000. And it will be almost exactly the same under the skin, too: the same kind of 3.0-litre V12 engine, the same four-speed gearbox. If, however, you’ve come over all Oliver Twist and would like some more, the list of possibilities to retromod the car is almost endless. This example, the first in a series of what is likely to be 10 cars or fewer, comes with a 3.5-litre motor and GTO’s own five-speed gearbox for a price of around £850,000.

But GTO’s Cal Spyder (as they tend to be known) is different from Ferrari’s in one other invisible but crucial way. I haven’t driven one of the 56 (very few have), but I have driven another 1960s Ferrari convertible, a 275 GTS, and heretical though it might seem to say, it just wasn’t very good. The car was beautiful and the motor a joy to hear, but shorn of its roof, the spidery spaceframe chassis rattled and shook so much that the steering, ride and handling were all quite seriously affected. And the faster you went, the worse it became, so I ended up just driving it slowly, which rather defeats the point of having a Ferrari.

Mindful of this, GTO has added chassis strengthening in strategic places in the sides of the car and the effect is, well, transformative. 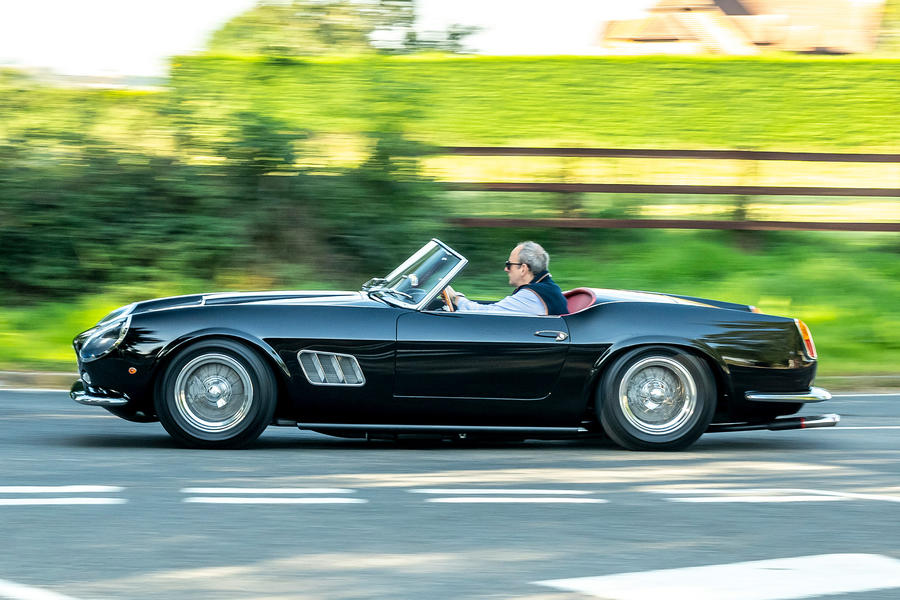 But first, let’s drool awhile. The Spyder is one of those cars that is so beautiful it actually makes you laugh when you see it in the metal for the first time. And, of course, while this one has been created using traditional techniques – it has hand-beaten aluminium for its body – so too is it born from digital data, which means everything fits together rather better than it might have done 60 years ago. This car comes with flawless Nero paintwork, just like James Coburn’s original car, which, when sold in 2008, became the first car ever to be auctioned for over $10 million.

Cal Spyders came in two distinct series, with around 45 long-wheelbase versions being made from 1958 to 1960, when they were replaced by the lighter, more sporting short-wheelbase model. Which is great unless, like me, you measure 6ft 3in or above. Because with 20cm less space between the wheels, I have to splay my legs either side of that fabulous triple-spoked, wood-rimmed Nardi steering wheel just to reach the pedals. But it’s no less gorgeous in here, with those inimitable Veglia clocks, acres of perfect red leather and that black-topped gearlever sprouting so invitingly from the transmission tunnel.

You turn the key through 180deg, then press it and the V12 fires in an instant. You can have your engine pretty much as you want it to be: GTO offers not just three different capacities but also eight different camshaft profiles, from soft road to full race. You could have an output of as little as 240bhp, or as much as 400bhp if you’re prepared to pay for it. This car is right in the middle, a 3.5-litre engine with 320bhp, which for fast road use seems about perfect. Remember too that it has only around 1050kg to carry, giving it a power-to-weight ratio similar to that of a brand-new Porsche 911 Carrera S. This is going to be no slouch at all.

At first, it’s all about the engine because it lays down one of the most cultured and fascinating soundtracks you could ever hope to hear with a steering wheel in your hand. Endlessly elastic, it’ll pull from idle in any gear, goes hard from around 3000rpm and probably won’t hit peak power until close to 7000rpm. Race motors go higher still. Given that the fundamental design of this engine stretches back to the 1940s, that is fairly astonishing. And it’s fast, not in that instantly gratifying wham-bam way of modern turbo motors, but with that inexorable feeling and rising crescendo only the finest multi-cylinder naturally aspirated units can provide.

The five-speed gearbox is one of the best of any kind I have used. You feel like you are moving the most precision-engineered cogs through a deep bath of thick oil, probably because you are. The shift is utterly precise and, because it’s quite heavy, shot through from the shoulder, as it should be for this kind of car. And were this really a 1960s Ferrari roadster, I might have had to stop there or start getting tucked into its many other dynamic limitations. But not with this car. Its additional structural rigidity is the gift that keeps on giving. You notice it first in the unpolluted response of the steering. Even on old-fashioned Michelin radials, you always know where the nose is going, the prancing horse in the centre of the wheel never blurring now that the scuttle shake has been largely eliminated.

With that new-found accuracy comes confidence: the confidence to drive this car not like some automotive show pony but a Ferrari. And it’s beautifully balanced too. Grip levels are pretty modest but it doesn’t understeer at all. You just aim the nose at the apex, get back on the power and allow the V12 to either keep the back planted to the road or rotate it to whatever angle you desire. It is simple, playful and easy.

It even rides properly despite its live rear axle, and this is important because while it’s commendable that it really handles pretty well now, this is a Ferrari touring car, one born for wide open roads, not tight and tortuous tracks. And while I drove it through England’s Home Counties, my heart was in the California desert, where it would really come alive. Hour after hour in the company of that peerless V12 engine, up into the mountains and down the other side with no agenda other than to just drive. For that it would be perfect. It even has quite a big boot. 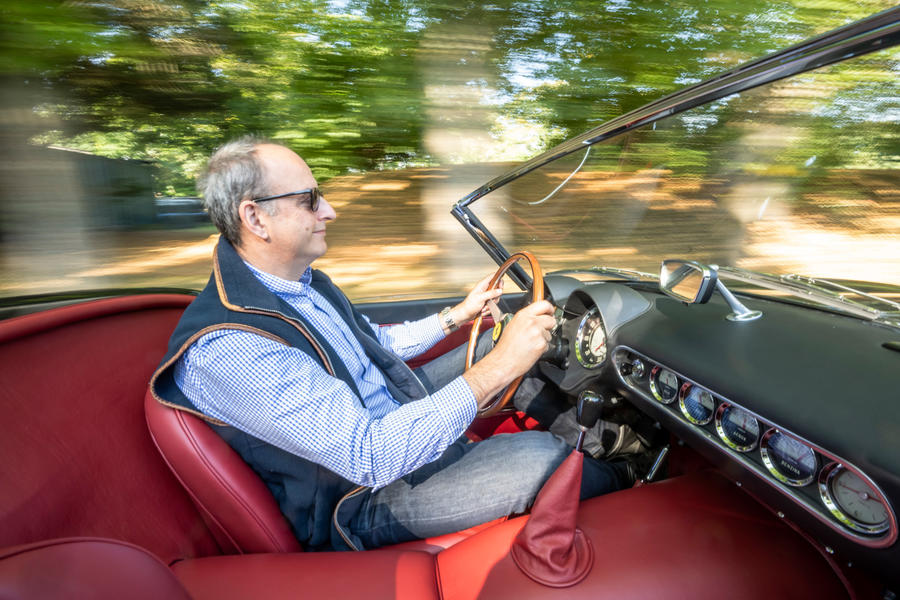 I know there are people who get sniffy about these recreated cars, and others who fear that generations from now unprincipled owners will try to pass them off as the real thing, and I get all that. But I don’t want to get involved in the politics here.

My job today is just to tell you what this car is like to drive and try to apply some historical perspective to it. And it is as good as it looks, a wonderful evocation of another era with just enough hindsight applied to address the shortcomings of the original without in any way turning it into a pastiche or harming its character.

The point is this: you may or may not like the idea, but you cannot deny that the car itself is bloody wonderful. 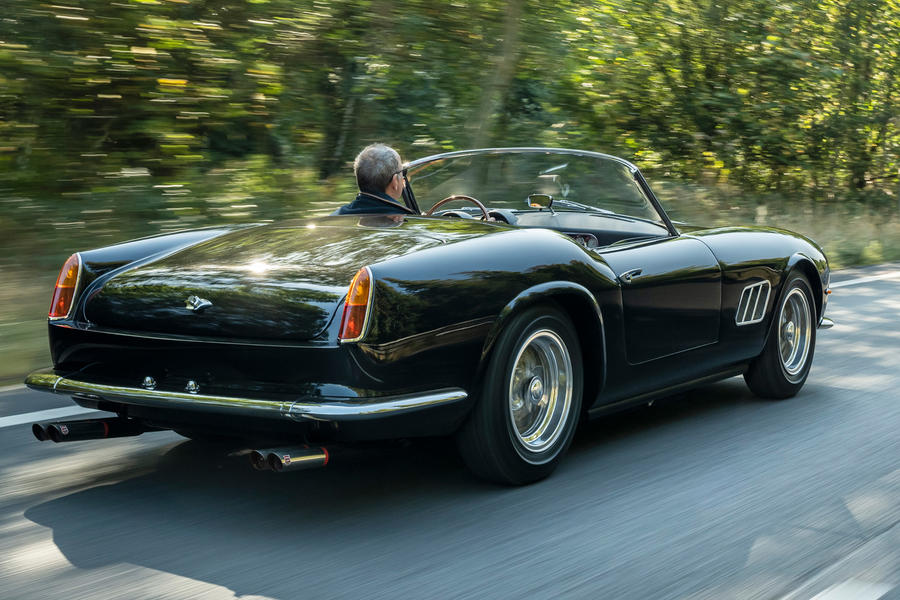 For £750k you'd expect them to bolt the grill badge on properly!

Anton motorhead 15 September 2021
This recreation is just eyewateringly beautiful and infinitely more interesting than the countless new hypercars than seem to come to the market on a weekly basis. I want one - badly, but oh that price! I find solace in the fact that they are all spoken for - probably - I hope.
View all comments (11)