BACK TO ALL TOP 10s
Currently reading: Top 10 best family hatchbacks 2020
UP NEXT
Family SUVs

Stylish, well-equipped and with an engine to suit every requirement, the family hatchback segment remains one of the market's most important. But which make our top 10?
Share
Open gallery
Close
Share story

The traditional family hatchback segment might not be the market's fastest-growing, but it remains one of the most important and hotly contested. WIthin it, class stalwarts are reinventing themselves all the time, while brand-new entrants come along with regularity, each intended to break through and take the market by the scruff of the neck.

Very few make much of a dent in the established power of the blue-chip contenders. The traditional family hatchback as we once knew it no longer really exists. Once humble day-to-day hauler of people and their luggage, these cars have been transformed into often quite striking five-door aspiration machines that offer something for everyone, whether you're looking for a frugal diesel, a peppy small turbocharged petrol engine, bargain transport or something with an upmarket flavour or a sporty lilt.

Below are our top 10 family hatchbacks currently on sale.

With the launch of the Mk8 Golf, Volkswagen has reclaimed what many would consider its rightful spot at the top of the family hatchback class. Mechanically speaking, the updates introduced on the latest Golf are relatively light: it still sits on the same MQB platform as its predecessor; and save for the introduction of 48v mild-hybrid technology, uses largely the same engine line-up.

But the sum of all these minor tweaks is a seriously impressive car. As far as ride refinement, handling balance and performance are all concerned, the Golf maintains its identity as the stand-out all-rounder in the class - and does so despite a slightly stiffer suspension set-up that would now dissuade us from opting for torsion beam-equipped models. Interior space has been improved too, and an even more high-tech infotainment offering will appeal to many. That said, not everyone will be convinced by its new exterior, and the cabin doesn’t quite promote the levels of material plushness we were used to in previous Golfs.

A GTI version is just around the corner, and an even hotter R model is set to follow soon.

Save money with new Golf deals from What Car? 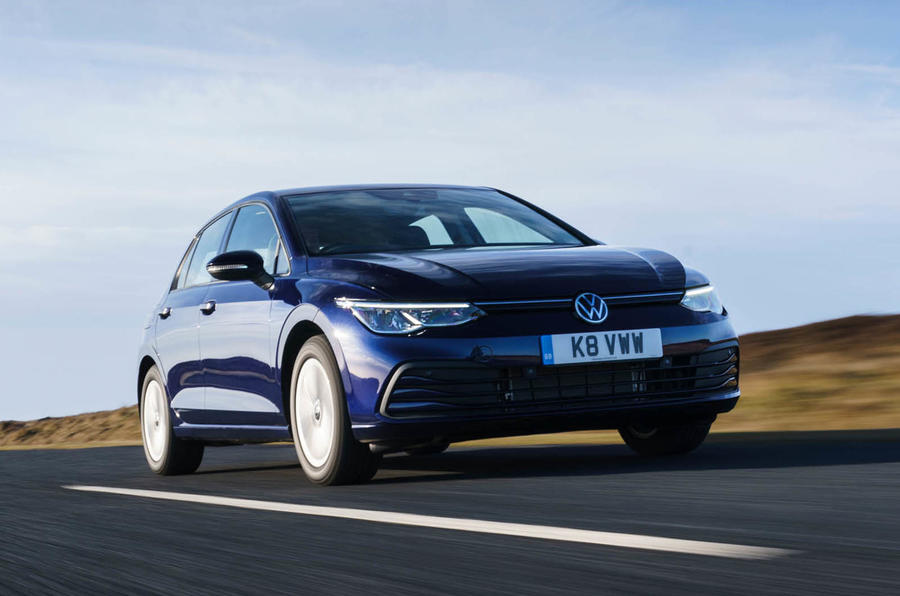 Ford’s new Focus has claimed back its old spot at the top of the Autocar family hatchback pile with its outstanding handling and superbly pliant, well-resolved ride. Having arguably been in slight decline since the death of the Focus mkI, the best-handling family hatchback in history is undoubtedly back to its very best on driver appeal.

There’s plenty of space inside, while a completely new platform and exterior have given the Ford a new lease of life. Its cabin still doesn’t quite offer the same levels of fit-and-finish as a Volkswagen Golf or Seat Leon, though.

This fourth-generation model is available with both petrol and diesel engines, while base models make use of a torsion beam rear suspension configuration and passive dampers instead of the multi-link arrangement, partnered optionally with adaptive dampers, of more powerful models. Even the lower-end and less sporty configurations of the car stand clear of their rivals for handling dynamism, however.

The excellent 2.3-litre ST represents the sportiest offering in the line-up. Somewhat unfortunately, Ford has ruled out a full-bore RS for this model generation.

Save money with new Focus deals from What Car? 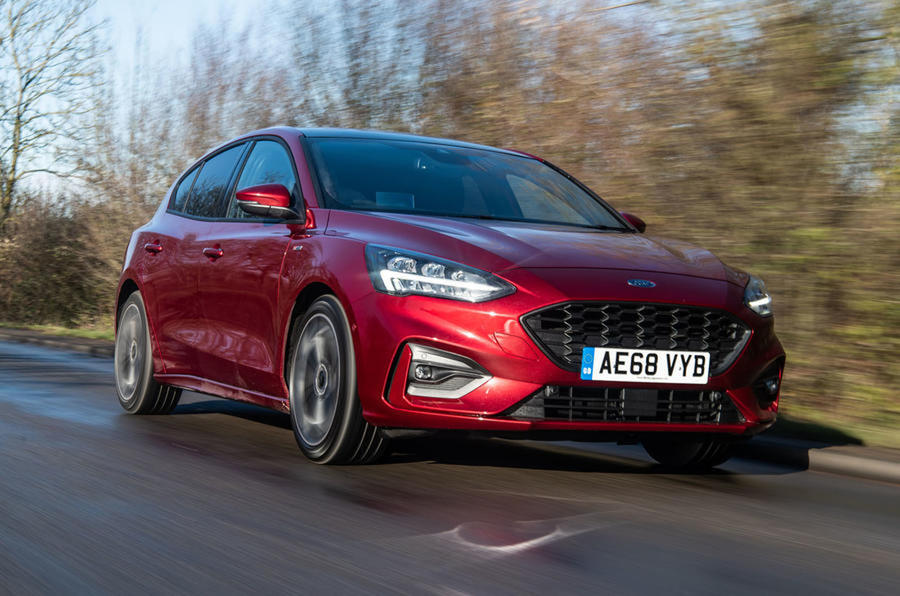 Seat’s fourth-generation Leon remains as closely related to the class-leading Volkswagen Golf as ever, being based on the same MQB platform and effectively making use of the same engine line-up.

This latest Leon perhaps isn’t quite as visually alluring as its immediate predecessor undoubtedly was, and that perhaps erodes part of its identity in comparison with its Golf and Skoda Octavia relations. Be that as it may, however, it undoubtedly remains the sharpest and most entertaining family hatch in the VW Group portfolio - even if it doesn’t quite match the Ford Focus for handling zest. It’s interior is closely related to that of the Golf, looks smart and offers a level of space and practicality that is among the best in class.

The Leon’s lower price point is another advantage it has over the Golf, although it’s worth pointing out that 148bhp models don’t come with the more sophisticated rear suspension you get in the Golf. Nevertheless, the latest Leon remains a perfectly recommendable hatch. We eagerly await a go in the go-faster Cupra models.

Save money with new Leon deals from What Car? 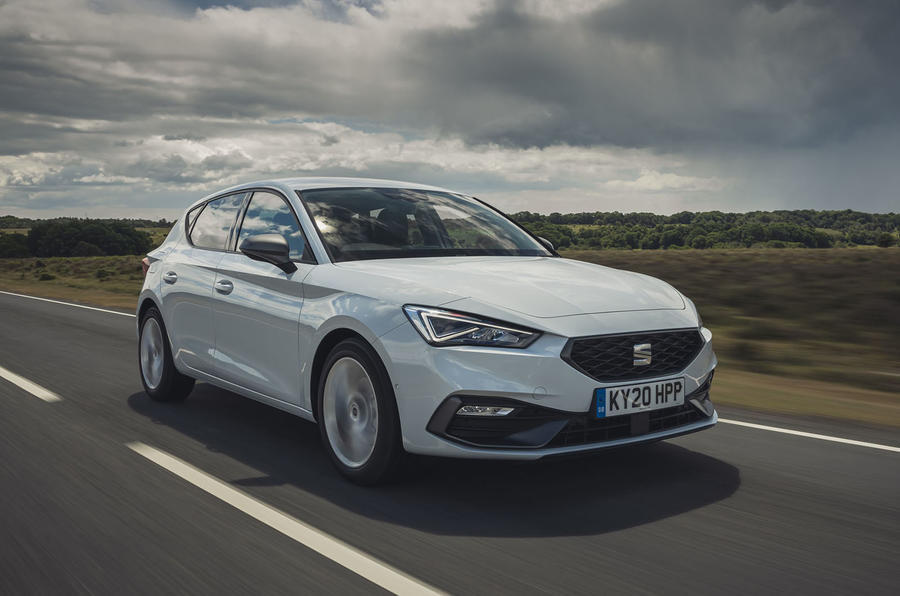 Cracking into the top half of this list is something of a result for BMW, whose 1-Series hatchback – famously the only car in the class to attempt to wield a rear-wheel drive chassis in the modern era - has what we might call a dynamically troubled past.

Suffice it to say that, now that it has adopted mechanical convention for engine layout and axle drive, the latest 1-Series has lost little and gained quite a lot. A front-wheel drive layout (four-wheel drive options are offered in tandem with the more powerful engines) serves the car well, and handling is neat and secure, with body control and driver engagement good enough to distinguish the car against most of its rivals. Interior packaging, meanwhile, is much better than in the rear-driven predecessor, with second-row occupant space and luggage capacity both markedly improved.

A good choice of impressive petrol and diesel engines, mated by and large to slick and efficient transmissions, and equally impressive onboard infotainment technology, makes this car our current pick of the premium-branded hatchback bunch.

Save money with new 1-Series deals from What Car? 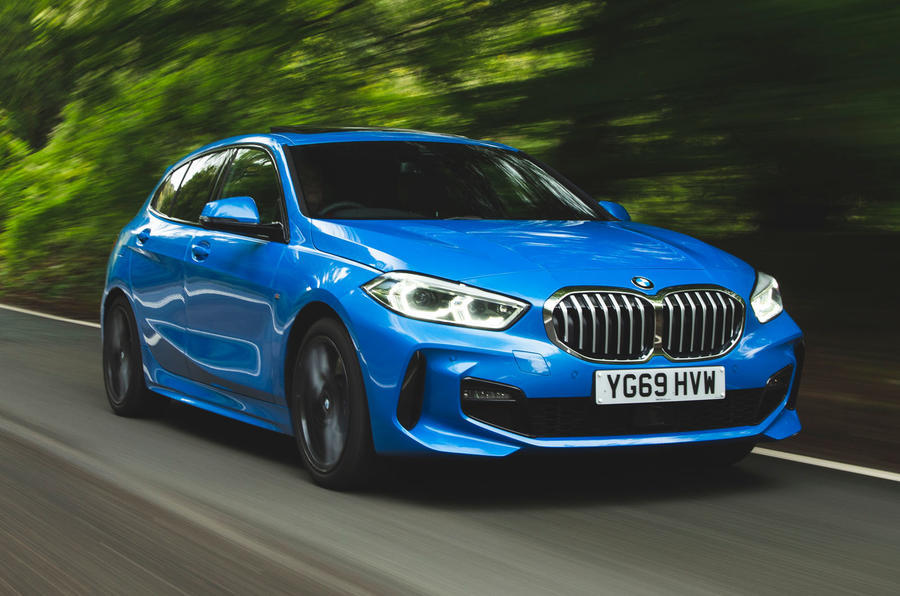 The fourth-generation Mazda 3 could well be the best looking family hatch currently on sale. And, joy of joys, it retains all the qualities that made its predecessor such an appealing contender in this highly competitive class: strong value for money; spry handling; and a choice of atmospheric petrol engines.

Inside, it’s more competitive with premium offerings in the hatchback class thanks to higher levels of perceived quality than ever before. It has Ford Focus-rivalling levels of driver appeal, too, courtesy of its quick, direct steering; a precise and slick-feeling manual ’box; and fine body control.

The car’s 2.0-litre SkyActiv-G petrol motor doesn’t quite provide enough punch to see it topple the best in class, but the new-generation SkyActiv-X alternative is more torquey and more efficient at a cruise. A slightly reluctance to rev, and a certain roughness under load, are it’s only disappointments.

Save money with new Mazda 3 deals from What Car? 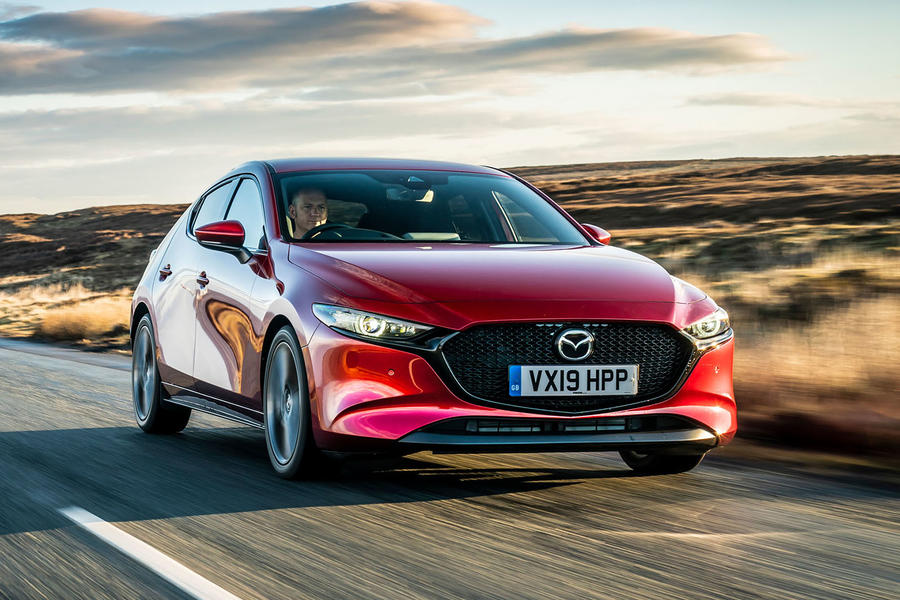 The latest Octavia remains true to its roots by sticking to its traditional strengths: practicality and affordability.

In estate guise, the Octavia simply outclasses all of its rivals for boot space, while the liftback isn’t exactly short on space either. To drive, it might not offer the sort of engagement you get from a Seat Leon or the same levels of sophisticated ride-refinement as the Golf, but it certainly isn’t far off.

As ever, it remains the pragmatist’s choice among its VW Group siblings. Those simply looking for an affordable family runabout with acres of passenger and storage space will be seriously impressed by what’s on offer here. At the same time, those stepping out of a Ford Focus might be a bit put off by its comparatively sedate character. The forthcoming vRS models will no doubt go a long way to rectifying that complaint, however. Either way, it’s an easily recommendable steer. 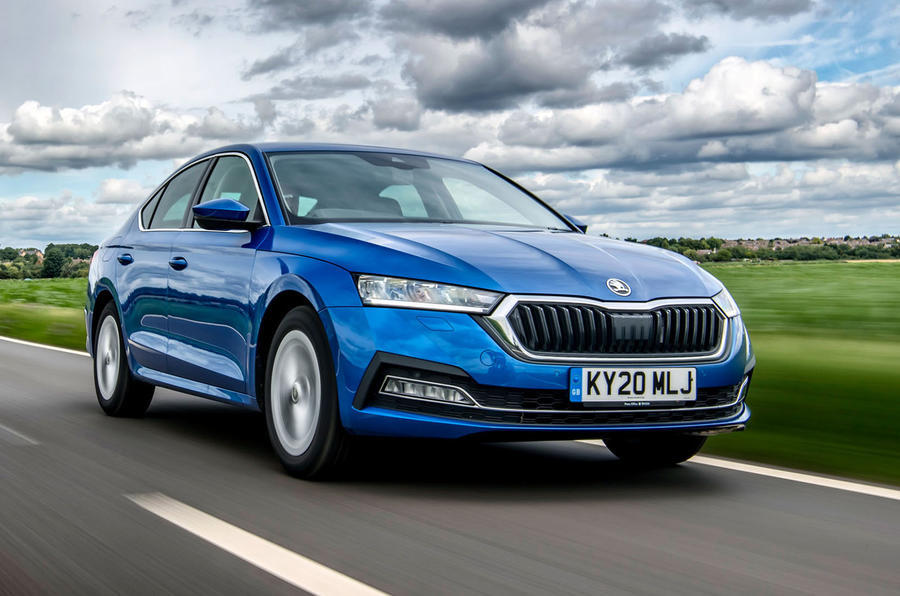 It’s third time lucky for the South Korean manufacturer, as this third-generation Ceed is the most convincing of its kind to date.

The handling and steering have found a greater level of sophistication than ever before, while its cabin offers plenty of room for four adults but still lacks some of the classy material appeal of more upmarket contenders. Its diesel engines are smooth and refined and offer impressive economy.

The Ceed is still some way off the position of class leader, but is nonetheless a worthy competitor in an incredibly competitive segment. Meanwhile, the Proceed compact shooting brake has design appeal, and no small amount of driver appeal, to augment Kia’s family hatchback range.

Save money with new Ceed deals from What Car? 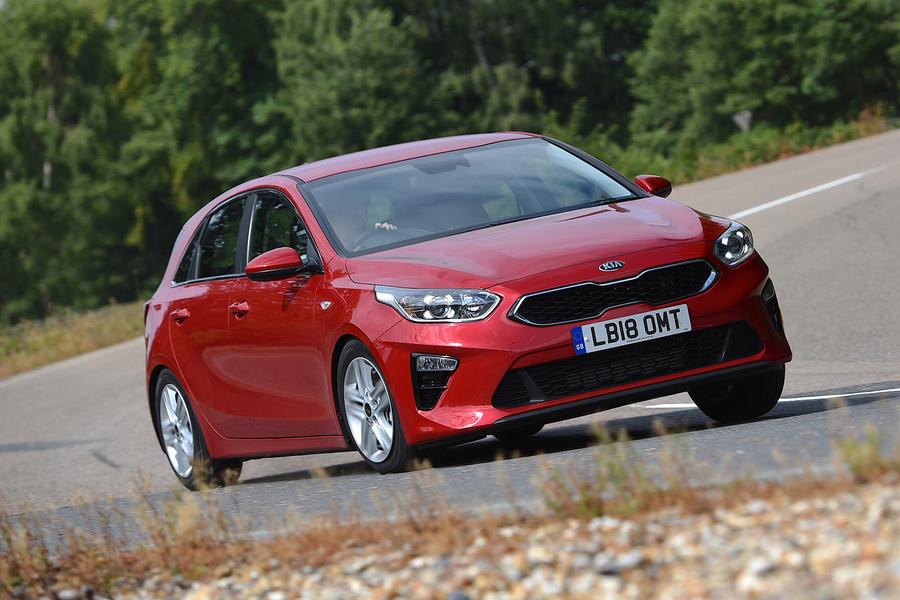 Over the course of 10 models, the Honda Civic has gone through a multitude of changes from the mundane to the divisive. This new-generation car is the biggest there has ever been, and is equally as striking as its predecessors to look at, albeit in a more conventional way. Dynamically, the car is better executed than before.

Honda’s new petrol engines are impressive, even if the triple isn’t quite able to match the 1.0-litre unit from Ford for high-revving driver engagement. The latest-generation Civic Type R hot hatchback version, meanwhile, is superb.

Save money with new Civic deals from What Car? 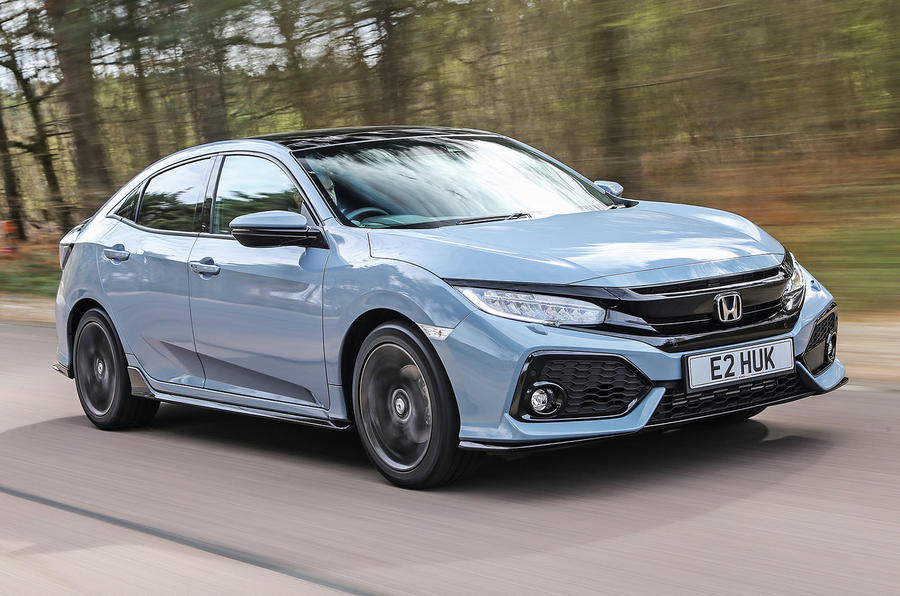 Mercedes’ latest take on the compact family hatchback is a more conventional car than A-Class regulars may be used to, but in the ways that will count to most owners, it’s certainly none the worse for the trade.

Having grown significantly since the last-generation verion, the A-Class is now among the bigger hatchbacks in the segment. A ritzy-looking, technology-rich interior is the car’s main selling point; it can be had, in more expensive trims, with a pair of widescreen instrument and infotainment displays and Merc’s latest MBUX voice recognition software, which works consistently well.

Interior packaging isn’t flawless, with oddly protruding interior doorhandles robbing knee space in both rows – but even so, there’s decent space on offer.

The driving experience, meanwhile, is generally slick, quiet and can be fairly punchy, depending on which engine you choose. Mercedes’ more powerful options are worth the extra spend; likewise the independent rear suspension of its more expensive derivatives, which make the A-Class a dynamic match for most cars in the class.

Save money with new A-Class deals from What Car? 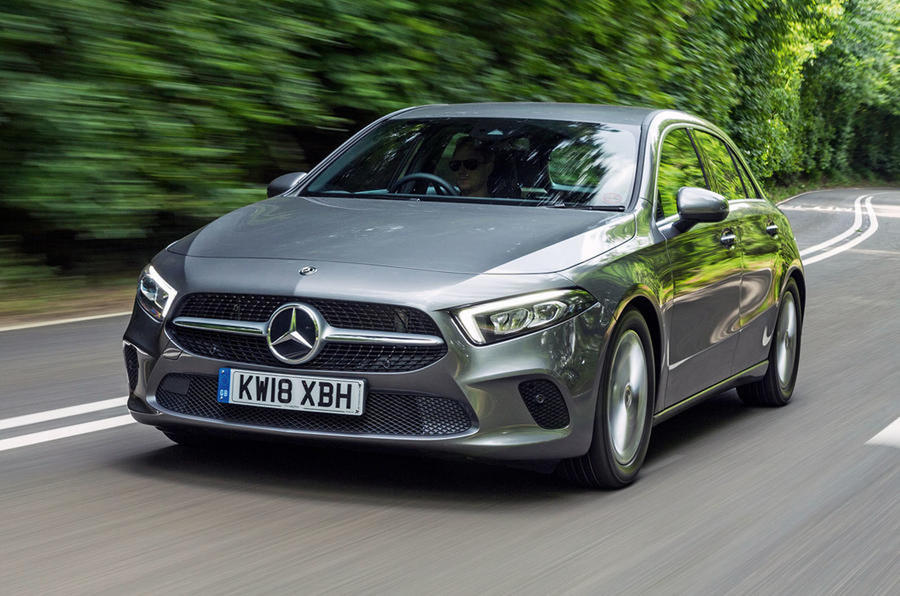 Formerly the best premium-badged family hatchback available on the market, which mixed the best from the Volkswagen Group, including a host of peppy TSI and frugal TDI engines and low cost of ownership, with the precision build and design appeal that Audi has to offer.

The A3 Sportback is like every other car to roll out of Ingolstadt, which is to say supremely well-constructed and suave inside, efficient, precise, refined and fast on the road, but a bit soulless to drive at times and not as involving as its rivals. It’s replacement has just been launched, and a first drive review is imminent.

Save money with new A3 deals from What Car? 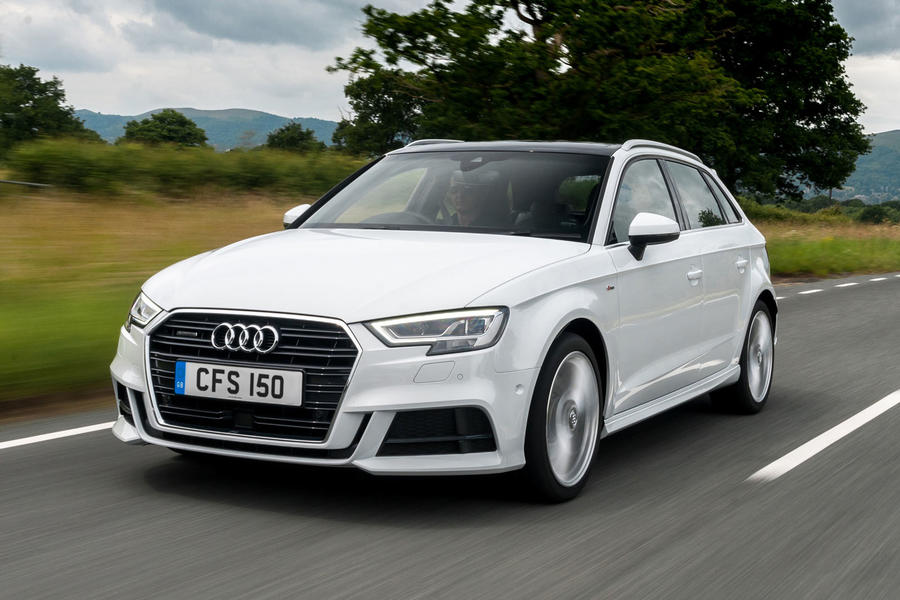