BACK TO ALL TOP 10s
Currently reading: Top 10 best sports SUVs 2021
UP NEXT
Style saloons

With heady performance, decent dynamic ability and a practical SUV body, sports 4x4s may be an acquired taste but here is our list of the best 10 money can buy
Share
Open gallery
Close
Share story

Performance SUVs are among the most divisive cars on sale. They’re powerful, yet also heavy and often shaped in ways that will make an aerodynamicist wince.

But they’re effective, too, mixing sports car pace and big-car practicality with the fashionable – to some eyes – image of an SUV.

As the list of 10 cars below shows, they’re all quite unusual and make this class one of the most eclectic in today’s new car market. These are cars for people who want it all – luxury, performance, space, desirability, plenty of four-wheel-drive capability and lots of driver appeal. So should we all so stubbornly refuse to compromise?

When Jaguar started making SUVs, it became a pretty bankable probability that it would one day make a performance SUV . And the day it did, it showed so many of its faster-moving German rivals where they’d been going wrong by launching a fast 4x4 brimming with pace and sporting sense of occasion, but also more laid back in its dynamic character than many.

The F-Pace SVR is the sports car for someone who wants a car to use on the office commute and school run, and for weekend errands – and not one so stiffly suspended that it feels like a gigantic, rolling vehicular contradiction. Its snarling 5.0-litre supercharged V8 gives it all the speed and drama a car of this size ever needed, and its purposeful handling is exciting; but its practical cabin and boot, and its pragmatic chassis tuning, also make it a car well suited to the real world.

A facelift for 2021 has helped nudge the fantastic F-Pace SVR into first place here. Its body is now ever so slightly more aerodynamic. A new torque-converter automatic lifted straight from the Project 8 can now handle all of that V8’s 516lb ft in all gears. Suspension tweaks have made the model more rounded and usable, but without compromising its dynamism. The interior - and infotainment - have been updated, too. Make no mistake: this is a seriously impressive piece of kit.

Save money with new F-Pace deals from What Car? 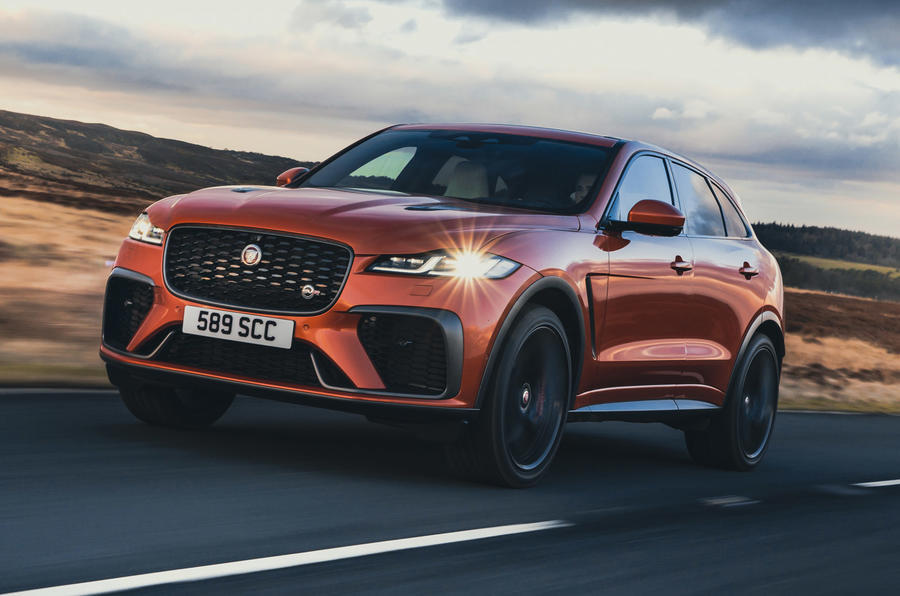 Such a car can be widely admired, but most certainly will not be roundly loved. For some, its flagrant thirst, weight, expense and comfort-limiting excess smack too obviously of needlessness. For others, more is simply more – and the hottest Range Sport does excess like few others.

A diesel V8 is, after all, plenty quick enough. However, this is a question of taste, not quality. Admirers of the super-SUV niche – and they are numerous and growing in numbers – deserve an unclouded verdict that recognises the outstanding prospect among many.

Save money with new Range Rover Sport deals from What Car? 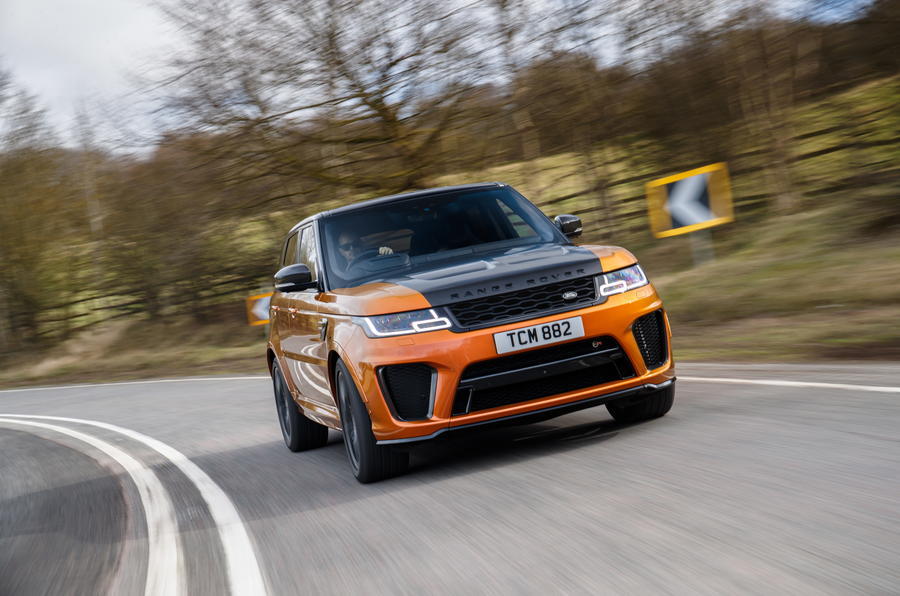 When Porsche recently updated its best-selling model – nearly 100,000 Macans were sold in 2017 alone – it elected to leave the exterior design largely unchanged.

Don't assume for a moment that any laurels have been rested upon, though. The Cayenne's younger sibling was already the best-handling car of its type, and a mechanical makeover has only lifted its sky-high levels of precision and composure.

This is a genuinely rewarding car to drive at almost any speed. In Turbo-branded form, it’s powered by the same 2.9-litre turbo V6 that you’ll find in Audi’s medium-sized RS models, and it has made the car a 400bhp prospect for the first time – and a typically fast, agile and purposeful one as well.

On air suspension as standard, the Macan Turbo cuts a more refined figure on motorway schleps than any hot hatch with comparable pace. At other moments, it’s capable of hunkering down on its axles in height-adjusted fashion, and of cornering like some modern Subaru Impreza wagon – a phenomenon that's genuinely remarkable to witness.

It's not as practical as many of the cars here – but is arguably more dynamically impressive than any of them.

Save money with new Macan deals from What Car? 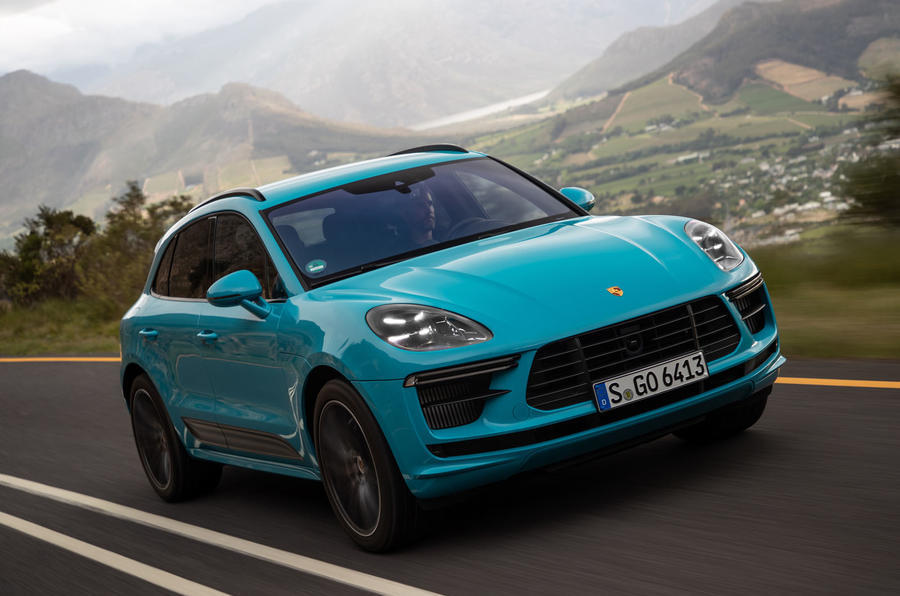 Alfa Romeo’s first performance SUV needs little introduction. It’s the car whose chassis was signed off by the man who brought you the handling of the celebrated Ferrari 458 Speciale. It also has a turbo V6 engine derived from a V8 from Maranello, and itself is from a maker of some of Europe’s most revered sports saloons and coupés, one that is back on form after something of a hiatus.

For the past few years, these elements have combined to stunning effect. Put simply, the Stelvio Quadrifoglio is one of the sharpest, most engaging performance SUVs currently on sale, driving with fine vertical body control and rapier steering response that belies its mass and body profile.

A mid-life update in 2020 has helped to lift some issues with perceived quality in the cabin, but even so, this still isn’t the plushest fast SUV that a fairly hefty sum of money can buy. As before, it’s also one of the more uncompromising members of its class when it comes to ride refinement and daily usability.

That said, if you care about driving thrills over and above anything else, this is probably the sports SUV for you.

Save money with new Stelvio deals from What Car? 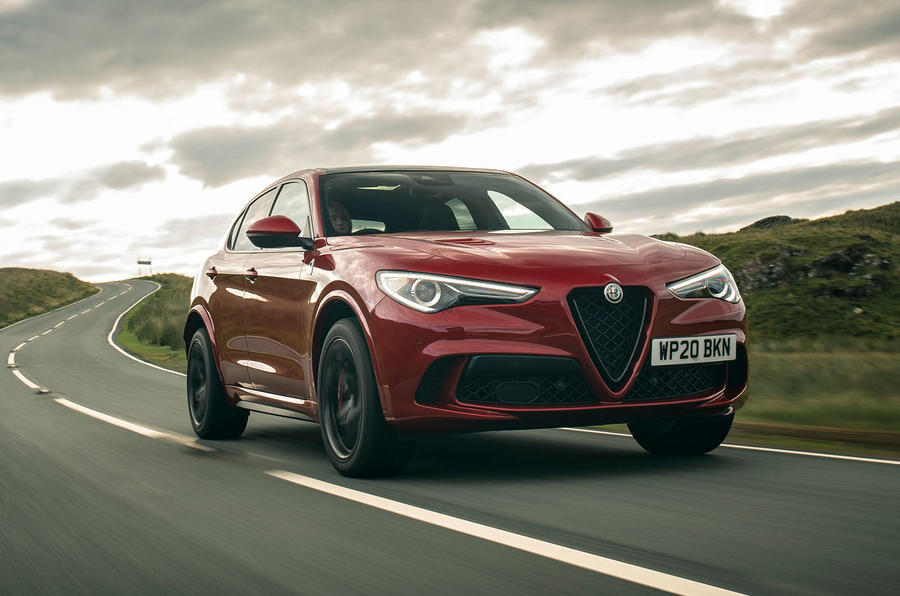 This is the quickest, in the real-world sense, SUV you can get. Thanks to its excellent visibility and a supremely effective chassis, a Cayenne Turbo can cover ground, from point to point and in any weather, faster than most cars.

However, in third-generation guise, the Cayenne has lost a degree of the incisiveness and rear-driven poise that made its predecessors such impressive performance SUVs. Make no mistake: the energy with which this 2.3-tonne SUV changes direction is still pretty phenomenal, but the Cayenne Turbo's previously fervid temperament feels as though it has been dialled back a notch in order to make it a more liveable, broadly appealing fast SUV than it was before.

Save money with new Cayenne deals from What Car? 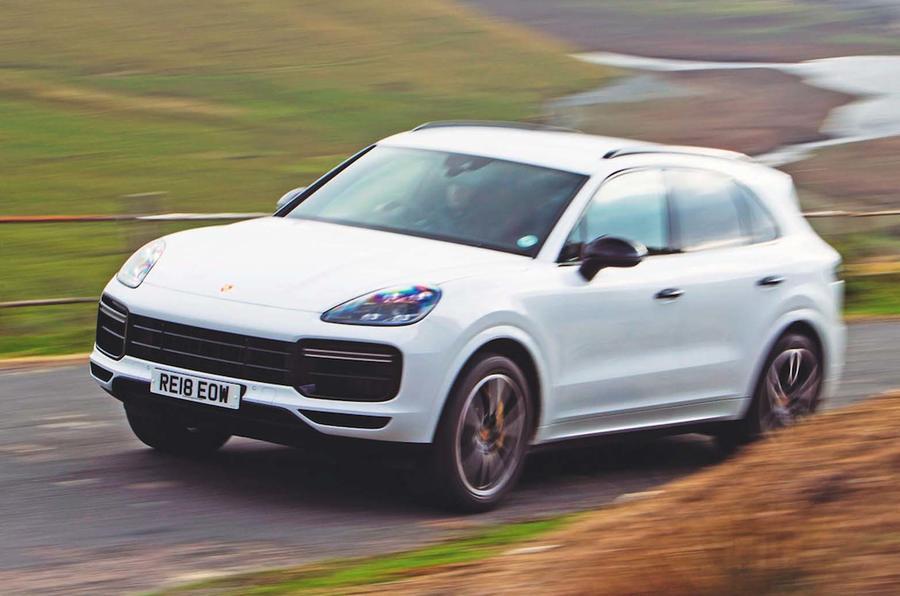 The SQ7 initially rose to prominence because it went about the business of being a fast, effective and impressively usable fast SUV in a slightly different fashion from the majority of its rivals. Central to this was its 4.0-litre, twin-turbocharged diesel V8, a powerplant that lent the SQ7 not only fairly phenomenal pace but also reasonable fuel efficiency - at least in the context of the other cars on this list.

In 2020, however, Audi ditched that oil-burner and replaced it with the 4.0-litre twin-turbo petrol V8 that appears in everything from Audi’s own RS models to Bentleys and Porsches. Here, it develops 500bhp and 568lb ft - all of which is deployed to stunning effect.

It’s an impressive car, this. Fast, refined and immensely comfortable with enough cabin space for seven people. Given its size, it handles well, too - although it can’t quite match the likes of Porsche, Alfa Romeo or Jaguar for outright driver engagement. And while that new petrol V8 might be a phenomenal engine in its own right, it’s not quite as characterful as the old diesel.

Save money with new Q7 deals from What Car? 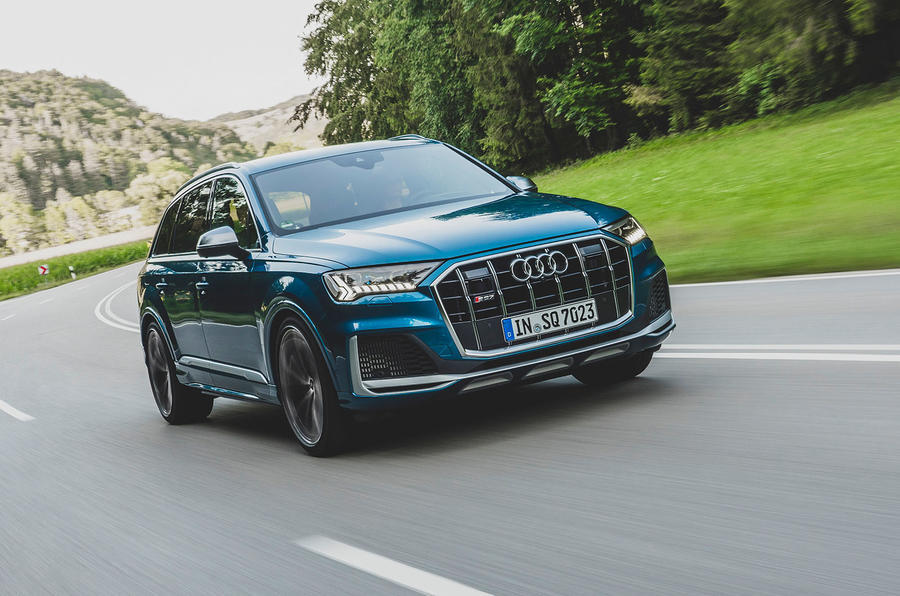 The GLC 63 Coupé’s biggest enemy is its five-door sibling, because that car offers the same performance from the same intoxicating V8 engine.

But if you’re smitten by the swoopy, divisive styling of the coupé, the car’s desirability will be almost unmatchable. It’s packed with the luxurious perceived cabin quality you’d expect from Mercedes-AMG and it also beats the Porsche Macan Turbo to 62mph by half a second - although it can’t match that car’s dynamic abilities.

This firm, noisy ride will limit its appeal to less enthusiastic drivers. However, its retention of an evocative petrol V8 in a mid-sized performance SUV, when some rivals have turned to six-pots, will be enough to draw some to the GLC 63 Coupé.

Save money with new GLC deals from What Car? 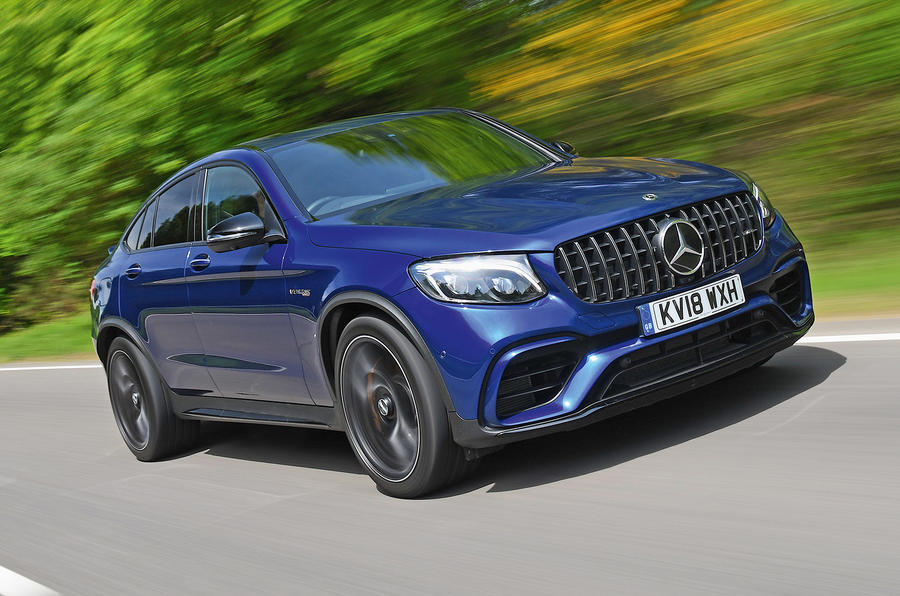 BMW is a fairly recent addition to the ranks of manufacturers making hot SUVs at the smaller end of the market. While there has been an X5 M and an X6 M for several years, this is the first time those cars have had smaller counterparts.

They’re oddly serious, buttoned-down counterparts, too. Using fixed-height steel coil suspension rather than air, and seeking to carve out dynamic identities as higher-rising versions of the M3 and M4 rather than as any-occasion luxury SUVs with a performance flavour, the X3 M and X4 M are firm-riding, keen-revving, six-cylinder options that seem desperate to recover some sporting credibility in what many would consider a doomed attempt.

The cars have identical axles and chassis tuning and use the same M5-derived four-wheel drive system, which combine to make for surprisingly high grip levels and keen cornering balance. Even so, they’re not the easiest cars to handle on the limit – and neither do they offer the broadest dynamic playbook in the class.

Save money with new X3 deals from What Car? 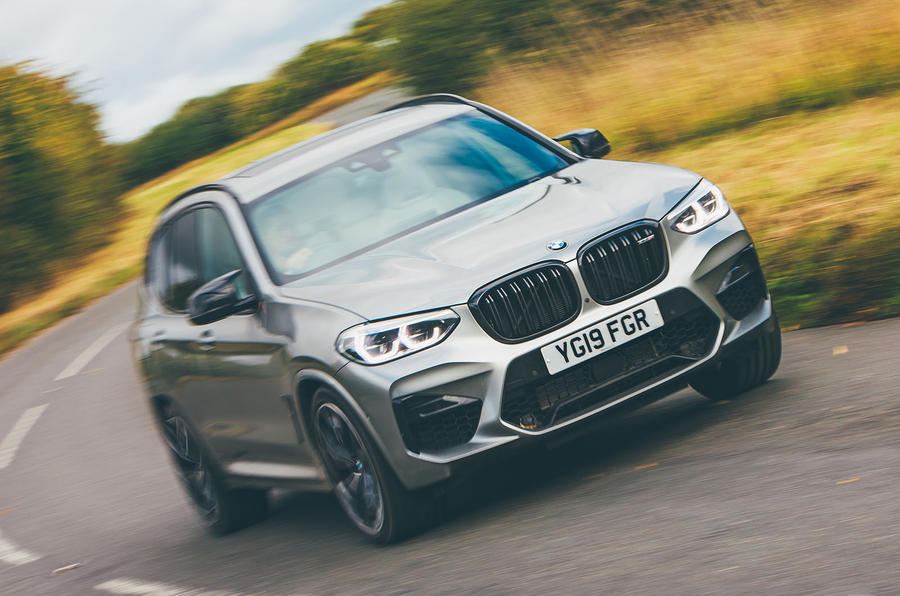 Any SUV with close to 600 horsepower that can crack 60mph from rest in three seconds flat is worth a mention in this top 10. The flagship Tesla Model X qualifies in both of those respects, and that it does so without burning a drop of fossil fuel arguably gives it greater 21st century appeal than any other car here.

Using twin electric motors and having two driven axles, and height-adjustable air suspension to boot, the Model X wouldn’t be last in this class for outright off-road ability. Usability comes with the usual EV caveat, but with 95kWh of usable battery capacity to tap into, it can put more than 250 miles between charges when driven for efficiency.

The weight of its batteries does adversely affect its ride and handling somewhat, and to the point where the car’s appeal as a performance car is markedly blunted. But as a fast, roomy, zero-emissions family car, there’s plenty left to recommend it.

Save money with new Tesla Model X deals from What Car? 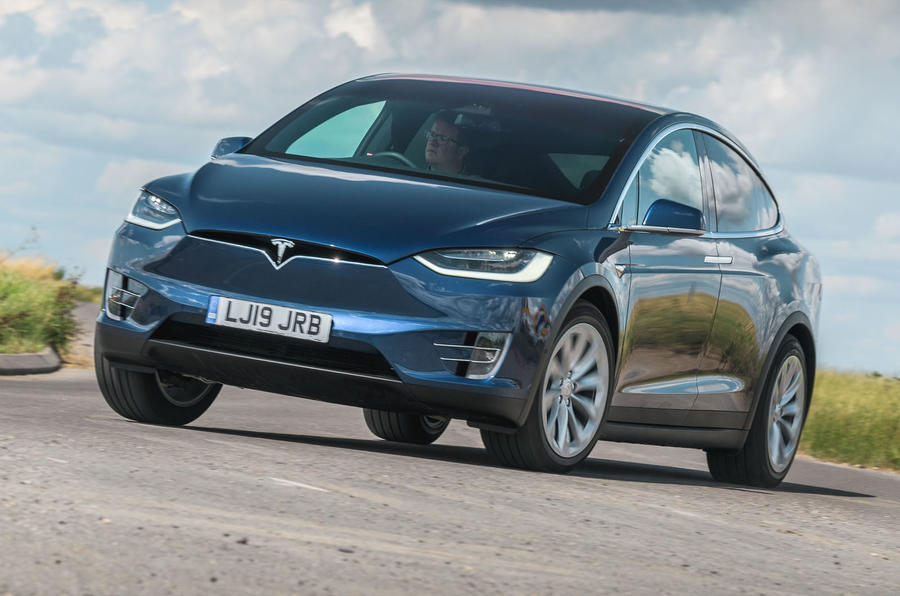 Other SUVs are more luxurious and even better to drive at speed, but the Levante offers a broad spread of talents, backed up by a certain degree of style that few can match.

It’s not cheap, ranking ahead of even the Porsche Cayenne S, which is a mightily impressive machine. But the Italian SUV is arguably more desirable, not least because it’ll likely remain rarer.

It’s also fractionally cheaper than a Range Rover Sport with its much less powerful 334bhp supercharged V6. If you’re sold on the exclusivity and romance of the Maserati badge, the Levante S will be hard to ignore.

Save money with new Levante deals from What Car? 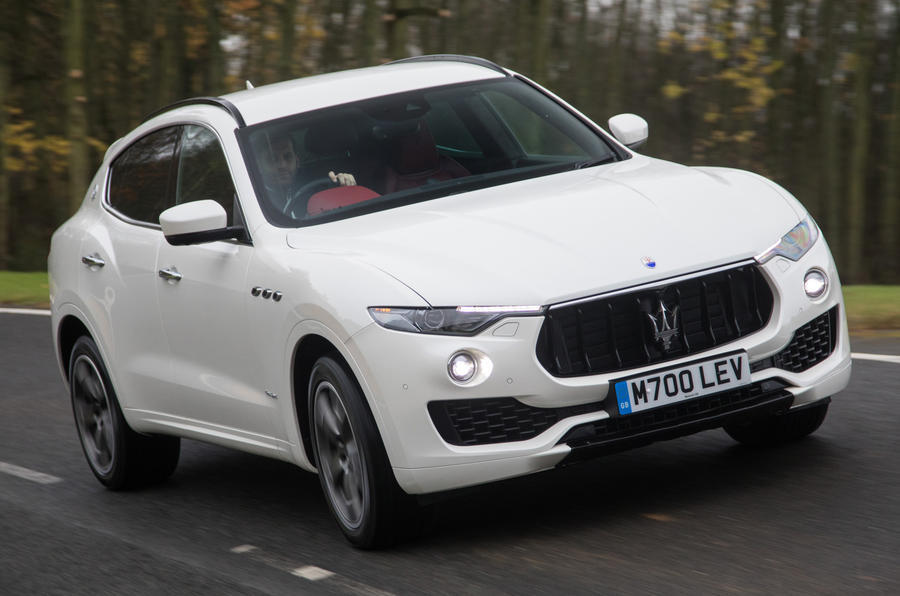