BACK TO ALL NEWS
Currently reading: Dust or Bust: taking a £200 Nissan Micra grass-track racing
UP NEXT
Is the Ferrari SF90 the future of the supercar?

A three-hour marathon in a field? No sweat for our tough little budget banger. We scaled the motor racing heights to give it a perfect send-off
Share
Open gallery
Close
Share story

As long as I live, I may never execute a more successful opening lap in a motorsport event.

Having picked my team’s grid position by pulling a number out of a hat, I started the three-hour grass-track event seventh out of 19 cars. The train of tired old hatchbacks and the odd knackered coupé completed two slow laps behind the safety car before the green flag was waved. Immediately after crossing the start/finish line, we squeezed one by one through the single-file chicane, then in the long right-hander that followed I was able to drive around the outside of the car ahead of me to climb into sixth position.

A corner or two later, the BMW 3 Series coupé that had started from fifth position spun, allowing me to slip past. And then, towards the end of the opening lap, one of the leading cars pulled over with steam pouring from its bonnet. And so, for a brief but oh-so-sweet moment, car 17 was flying high in fourth position. Fourth! Eat my dust, Lewis. 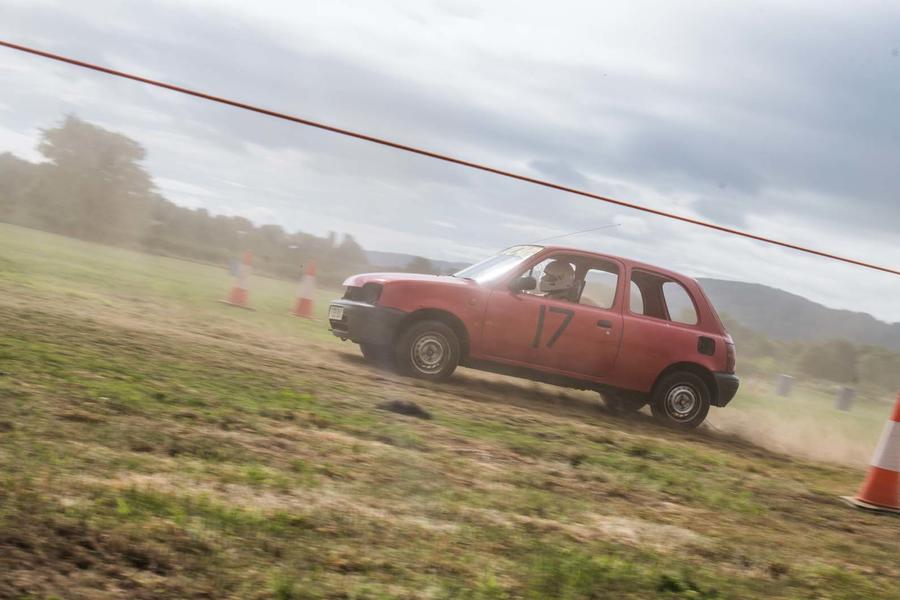 Allow me to bring you up to speed. A few weeks earlier I’d bought the cheapest used car I could find, which turned out to be this tatty 22 year-old, K11-generation Nissan Micra, to see if it was at all possible to buy a vehicle for peanuts and actually use the thing. By driving 500 miles in a single day and experiencing not one problem, I like to think we answered that question in emphatic fashion. Which rather begged the question: exactly how tough is a 1996 Nissan Micra? If it could survive three hours of being thrashed around a bumpy field, we would have our answer.

The Hearst Challenge, organised by Gloucestershire rally driver Dan Moss, is an annual endurance event that raises money for the local air ambulance. Over the years, it has donated tens of thousands of pounds to a very good cause. The only significant rules are each team must buy and prepare its car for no more than £500, and it must be two-wheel drive. Otherwise, it’s all fair game. 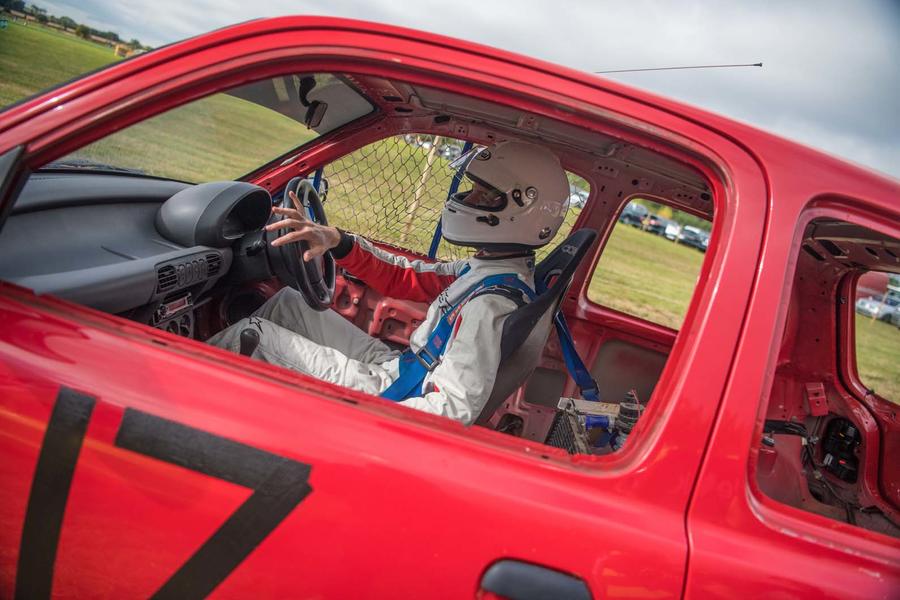 Two years after launch, the fifth-gen Micra range gets a warm hatchback: the N-Sport

Each team must be made up of three drivers. By simply recruiting two of my best mates, I inadvertently formed a kind of grass-track super-team. Rob Shipp is an amateur rally driver and by a clear margin the most gifted car mechanic I know, making him easily the most important member of the team. Adam Gould, meanwhile, is pretty handy on the tools himself and was for a while one of this country’s most promising young rally drivers. He has led rounds of the British Rally Championship and won many stages, and is able to do things in a car that people like me can only dream of.

Ah yes, and so we come to yours truly. I am no more handy with a spanner than I am with a clarinet, while my experience of driving competitively on the loose amounts to precisely nothing at all. But I would at least be supplying the car. 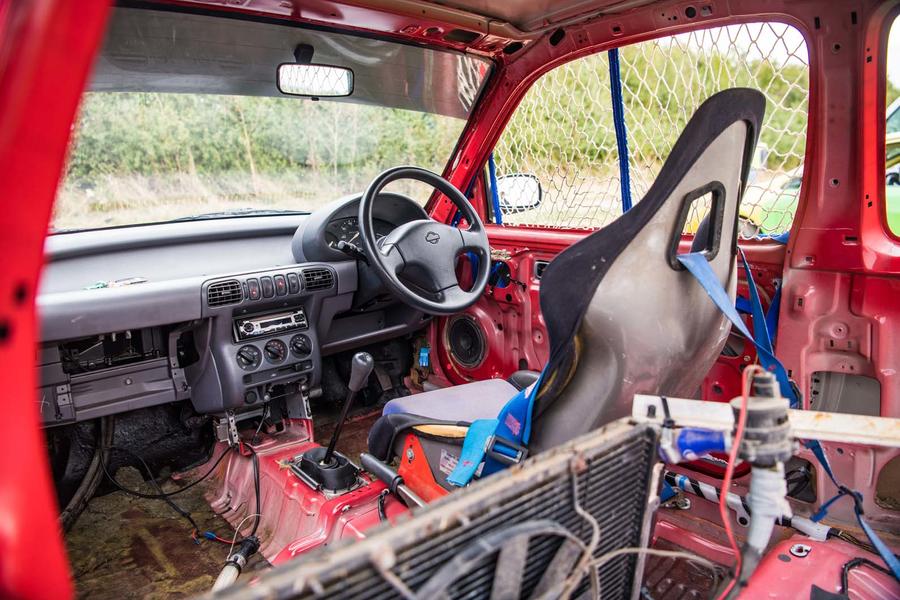 Rob, Adam and I spent the day before the event preparing the Micra, which basically meant ripping out every unnecessary item, apparently to reduce weight. All the glass, other than the windscreen, came out (Rob delicately removed the rear screen by throwing a spanner through it: ‘Ah, so that’s what those things are for’, I thought). I made myself useful by applying our race numbers using duct tape. Cleverly, Rob also fitted an auxiliary radiator into the cabin because he knew the car’s original radiator would get filled with muck and quickly cease to function. He also replaced a couple of drive belts and fitted a proper racing seat, albeit a very old one, while Adam passed him tools and I helpfully checked Twitter.

Our tyre strategy was a very simple one: we would use the tyres that were already on the car. Many other teams would fit knobbly rally tyres but, apart from the small matter of not having any of those, we also reckoned they’d put far too much strain on the hubs and suspension. However, we were at least smart enough to take the spare, which was an unused winter tyre and therefore the best one we had, and fit it on the front left corner, where it would be put to best use around the clockwise circuit. That left us with a single spare, meaning two punctures would put us out of the race. The final job was to replace the very worn out clutch with a brand new one. 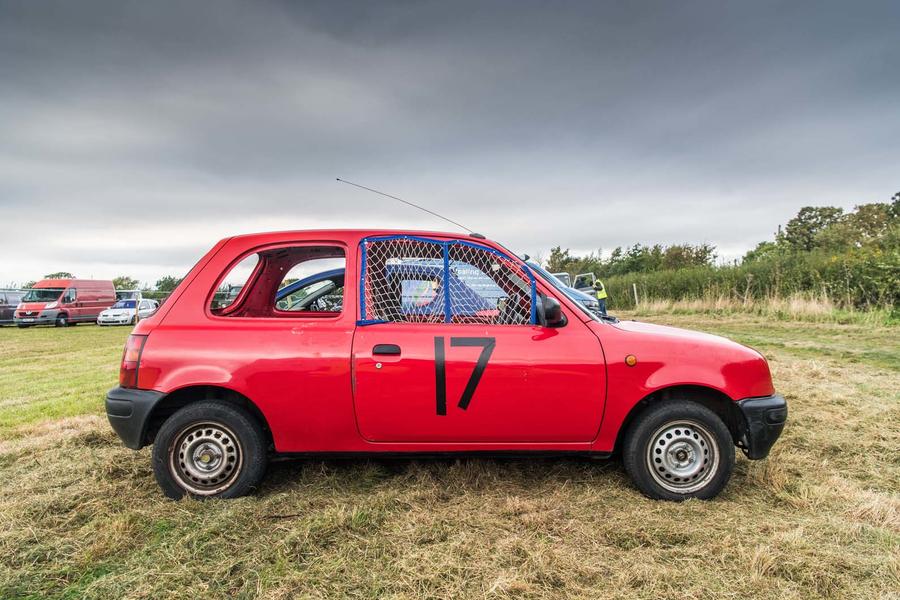 When we arrived on the day, we immediately felt as though we’d brought a banana to a gun fight. Everybody else had clearly put in rather more preparatory work than us. We had no doubt the little Micra would break down soon enough, or that we’d pick up a couple of punctures within the first 30 minutes, so our pit stop strategy called for very short opening stints to ensure all three drivers got a go.

As described, my opening lap was a peach. But just as I was eyeing up the car in front for third position, a whole stream of much quicker cars came flying through from behind, dropping me right back down the order.

The course was a little less than a mile long with a good mix of tight and twisty corners and a couple of much quicker sections. The car was fantastic to drive in the higher-speed stuff. With so little grip, you could really bung it in and feel the back end sweep around as you turned in towards the apex. I started off using first gear for the chicane, second for most of the lap and third in the quick sections, but I soon realised second gear would be perfectly adequate for the entire lap, as long as I held the engine on the limiter for a couple of seconds in two specific parts of the circuit.

That opening stint was enormous fun, but the hard, dry ground was like a washboard and the car rattled violently. I pulled in to the pits after 15 minutes, let Adam jump in and waited for the car to fail. 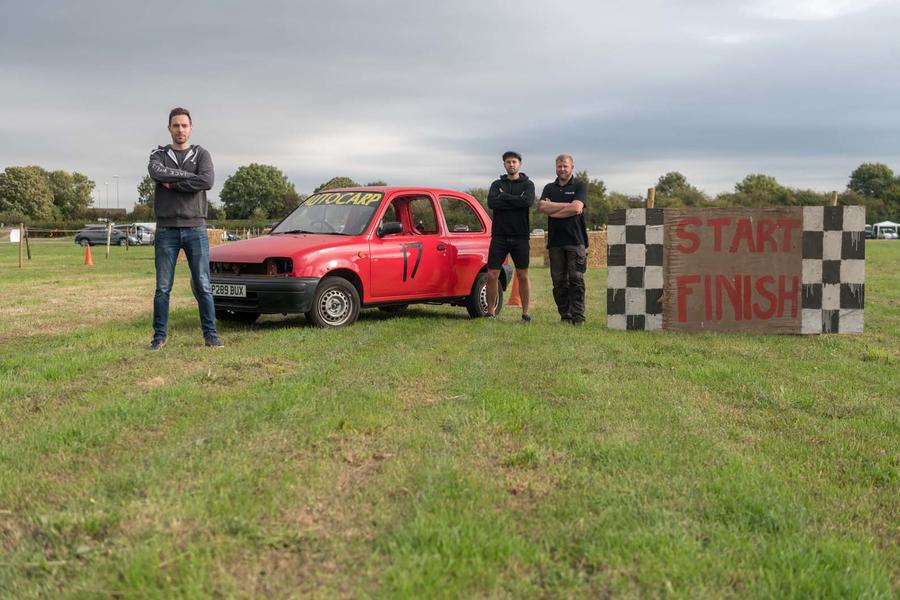 But it just kept on going. Rob drove a longer stint, then I got back in and carried on. The dust got everywhere. If you followed another car closely, you’d be completely blind for whole seconds at a time. We had no idea how we were getting on but, while other cars had to pit regularly with problems, our little Micra happily chugged away. This was going okay; maybe we were even in the top 10.

The other guys completed their second runs and I drove a short final stint, crossing the line after three trouble-free hours. The day was wrapped up with a prize-giving ceremony, led by Dan Moss. Starting from the bottom, each team was called out in order, along with their completed number of laps. When Dan reached 10th position and car 17 hadn’t yet been mentioned, I assumed we’d been forgotten. Then it emerged we had managed 86 laps, good enough for… fourth! 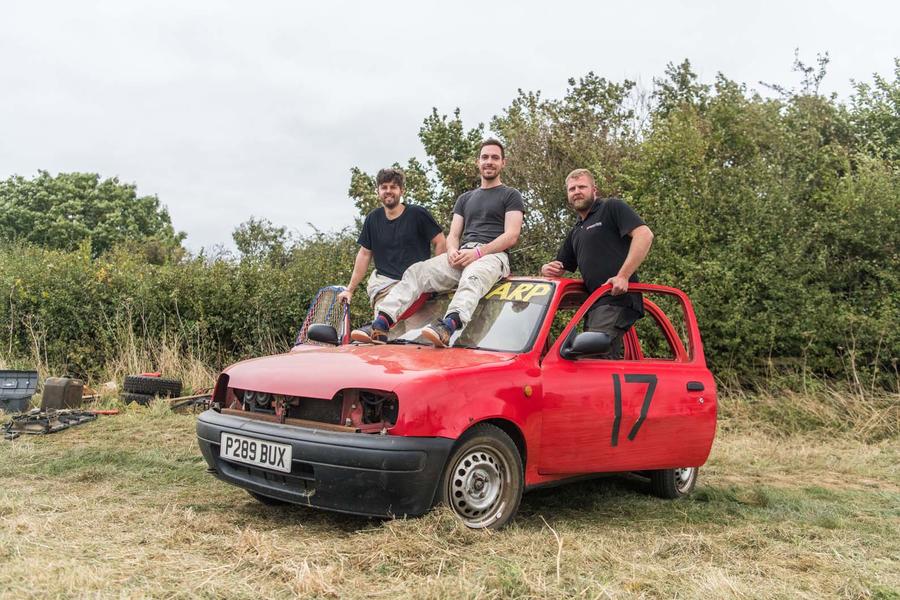 Had I walked away then, I would have done so a very happy man. But then we heard the team that finished ahead of us had completed just one more lap. A single lap. If it wasn’t for the completely unnecessary final driver change, we would have nicked a podium. Adam called it his greatest disappointment in motorsport and that – as anybody out there who is familiar with his competitive record will know – is saying something.

In the end, then, we considered P289 BUX’s motor racing debut as bittersweet. But make no mistake, the K11 Nissan Micra is a trooper.

This article was originally published on 11 November 2018. We're revisiting some of Autocar's most popular features to provide engaging content in these challenging times.

How to buy a banger

What's next?  The obvious move would be to fit the cheapest nitrous kit and / or turbo you can find and take it drag racing.

its crossing the line that is the sweetest victory. Trust me coming 2nd hurts far more I know, done it as many times as I have won events (serious rallying in Greece in the late 80's and early 90"s) . 32 class victories 31 second placesand never ever failed to finish. Thanks to Toyota reliability

Proof what a decent car this old gen Micra was

It may have been about as interesting as a fridge on wheels, but utterly bombproof reliability.

I can't find any reference to this competition anywhere - might like to take part next year - where can I find details?

It's very unusual for a car like this to survive so long - when you look at its MOT history it failed a number of times at high mileages with various underbody/chassis rot and was patched up when most owners would have saved the repair costs and  just scrapped it.