BACK TO ALL NEWS
Currently reading: Major update for 2022 Ford Focus brings infotainment overhaul
UP NEXT
Drawing fire: We talk to BMW's design director

All versions of ever-popular hatchback get a fresh face, with prices starting from £22,465
Share
Open gallery
Close
Share story

The Ford Focus has been given a major mid-life facelift to keep pace with rivals such as the Volkswagen Golf. Changes include a styling overhaul, new powertrain options and upgraded infotainment.

The new design for the family hatch echoes the recent revamp of the Fiesta, with an emphasis on reworking the front of the car. As with the Fiesta, the Ford badge has been moved from the Focus’s bonnet lip down onto the enlarged grille. LED headlights are now standard on all Focus variants and have the foglights built into them, and a darkened rear light effect includes a new “loop light” pattern.

The redesign encompasses separate styling details for Titanium, ST-Line, Active and performance-focused ST versions, including individual grille and fascia designs. ST-Line models feature side skirts and a rear diffuser and spoiler, while the rugged Active trim has SUV-inspired design tweaks such as additional lower body cladding and larger side vents.

Ford has also updated the premium Vignale pack, which is now available on a wider range of models, and introduced five new alloy wheel designs.

The ST hot hatch is further differentiated from the regular Focus with a revamped honeycomb grille and restyled side vents, skirts and spoilers. There is a new design for the 18in alloy wheels, with optional 19in versions also offered. 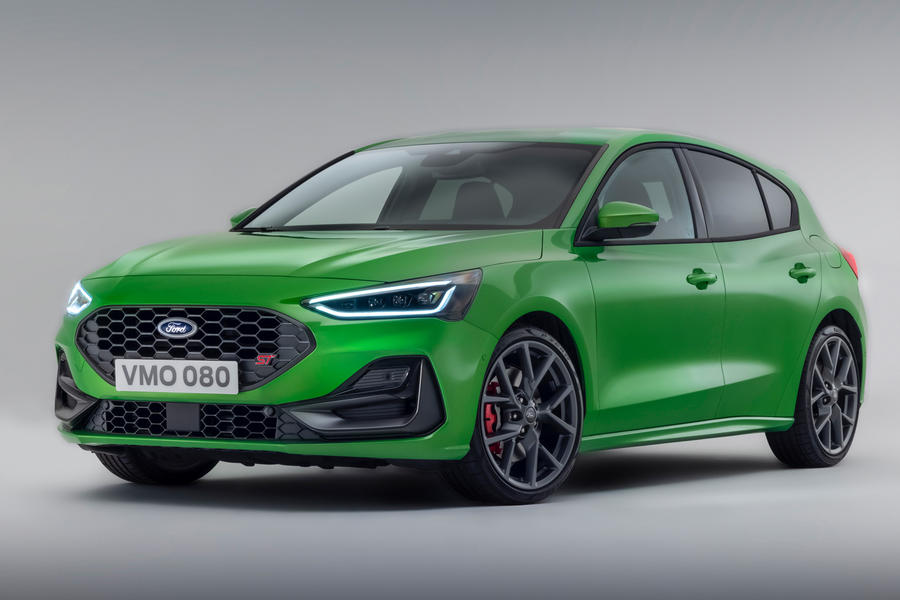 A major revamp inside the Focus ushers in the use of Ford’s latest Sync 4 infotainment, including a large, 13.2in dashboard- mounted touchscreen. The system now integrates the heating and ventilation controls, which, Ford says, results in a “cleaner and less cluttered centre console”. According to Ford, the system has been designed so that drivers “never are more than a touch or two” from being able to operate any function.

The Sync 4 system is compatible with Apple CarPlay and Android Auto, features speech recognition and can accept over-the-air software updates. Owners with the FordPass app can use that to check their car’s fuel levels and oil life from their smartphone.

Focus retains its position as the best-in-class to drive – spec dependent – while adding extra space, functionality and connectivity

The Focus ST also gains new performance seats that have been designed by Ford Performance engineers to offer greater support. 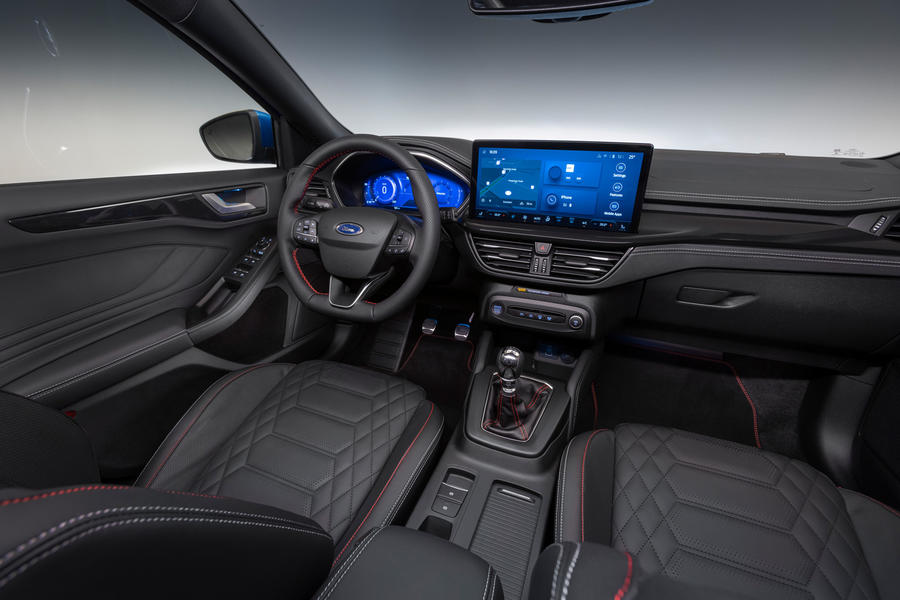 The powertrain line-up of the Focus is largely unchanged although the 1.0-litre mild-hybrid engine, badged Ecoboost Hybrid and available with 123bhp or 153bhp, is now offered with a seven-speed automatic gearbox for the first time. ST-Line models with the automatic gearbox will also feature paddle shifters, while the Focus ST's 276bhp 2.3-litre petrol powertrain remains unchanged.

The petrol 1.0-litre Ecoboost powertrain is offered with a six-speed manual only and a 123bhp output. The 1.5-litre diesel engine is available in 118bhp guise.

The Focus will, as before, be sold in both hatchback and estate bodystyles. Ford has worked to improve the practicality of the estate by revamping the luggage compartment with a new carpet that, it claims, is easier to clean and an extra side load net. There are also twin LED lights to illuminate the compartment, an adjustable load floor with a hinge that can be used as a virtual divider and a wet zone with a water- resistant liner.

Am I the only one who can see the 80's cortina/ Granada in that grille?

Looks even more bland than the previous version in my view, with no real differentiation with the ST-Line and ST. I don't like the 'everything on a touchscreen' idea either. Taking your eyes off the road and one hand off the wheel for so long is as dangerous as using a mobile, can't manufacturers get that? That alone would stop me buying one.

Although the add-on screen looks better on this upgrade, Ford really need to smooth out and upgrade the area between the dash bottom and the centre console, if they want to add more class to the interior (and it certainly needs it). Also, apart from the ST, those big seat side bolsters aren't necessary, and are just a damn nuisance.

The new nose improves the front end, just like the facelifted Fiesta, giving the car a less gawping, startled look. As for the new infotainment system, why do some manufactures feel having something that resembles and operates like a mobile phone or tablet is progress? They don't of course, it's all about looks and an assumption where something phone-like is considered progress. If TV remote controls still have physical buttons, why is it considered not ok to have buttons while on the move?