From £20,2808
Share review
We get behind the wheel of the cheapest (and slowest) Mk8 Golf on sale. Does it pack more of a punch than you'd expect?
Share
Open gallery
Close

Quite simply, the cheapest Volkswagen Golf you’ll find on the UK price list. Yes, we thought after the recent deluge of high-end Mk8 Golf models (the GTI, the R, the GTD and so on) it’s time to bring things back down to earth a bit more.

So how much Wolfsburg family hatchback does a smidgen over £23,000 get you these days? Well, you’ll likely be pleased to hear, the days of entry-level motoring have come on quite a distance in the past decade alone, when the cheapest engine and trim options were often found languishing firmly in the ‘one to avoid’ category. Then again, it was possible to get a Golf for under £14k a decade ago, so perhaps that’s to be expected.

A Golf in entry-level Life trim starts at a full £3500 more than the cheapest version of its platform-sharing sibling, the Seat Leon, while the other prong of the MQB love triangle, the Skoda Octavia, is about £3000 less. A false economy? Actually, no, because the Golf’s kit tally is remarkably extensive for a ‘boggo’ variant - a bit more so than its Spanish and Czech relations.

As with those cars, you get a dual-screen layout with digital instruments, but the base central touchscreen is 10.0in (the base Leon’s is 8.25in). You also get multi-colour ambient lighting - there are even puddle lights in the mirrors - adaptive cruise control, automatic LED lights all round with coming-and-leaving-home lighting, lumbar adjustment and keyless start. Indeed, the only real indication that this is the lowest rung in the ladder are the 16in wheels, which look more than a little lost in the Golf’s arches these days.

Life trim can be had with a bunch of four-cylinder petrols and diesels. But, sticking to the penny-pinching vibe, we’ve got the 1.0-litre triple here, in base manual, 108bhp form. 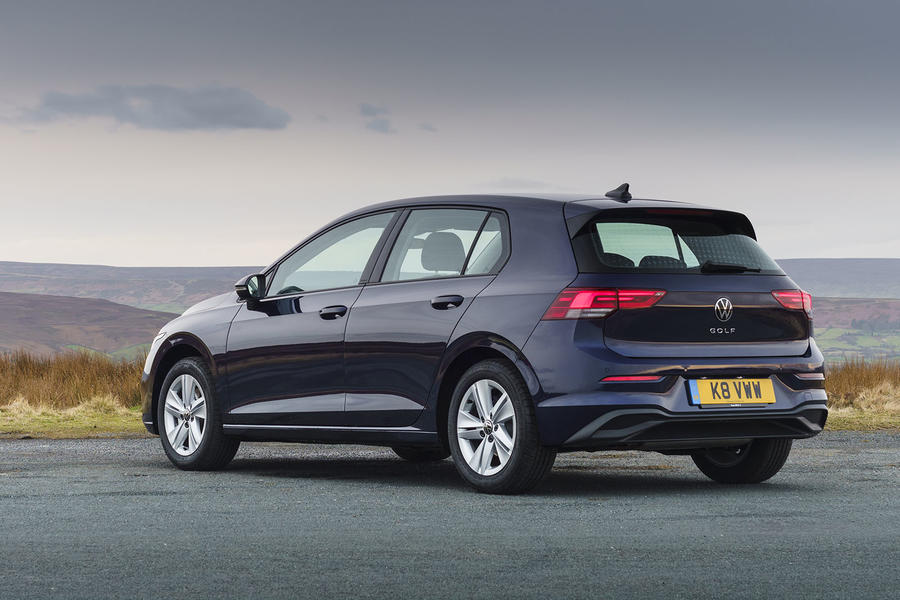 The days of regretting your parsimony as soon as you drive your poverty-spec hatchback off the forecourt are long gone. One glance at the spec tally tells you that, but it doesn’t tell you how grown-up and refined even the cheapest Golf is on the road.

Again, let’s quickly wind the clock back 10 years, when the base Golf was lumbered with a naturally aspirated 1.4-litre unit with a pitiful 78bhp and 97lb ft - fine in a small supermini, but pretty asthmatic for a family car, particularly once loaded with kids and the typical gubbins family life dictates you carry. There’s no such issue here. Peak power is best described as just about adequate in the context of today's market, yet you’ll rarely find yourself in a situation where you feel hopelessly under-endowed unless the traffic light grand prix is your favoured pastime. The secret here is the healthy torque delivery typical of a small-capacity turbo motor, with peak twist coming in 2000rpm to ensure that mid-range pace is, while pretty far from ‘meaty’, entirely sufficient for normal cut-and-thrust driving.

Engine refinement also plays a part here: engineers have beavered away successfully improving the NVH (noise, vibration, harshness) levels of three-pots, and the Golf’s unit might be the most unobtrusive yet. There’s little of the characteristic shudder at idle, it’ll roll along with the revs barely above idle with no fuss, and it settles down so much at a cruise that I occasionally found myself sat in third when I thought I was in fifth.

That gearbox itself is reasonably slick and tactile, mated to ratios not too languidly spaced for economy - refreshing at this end of the class. That’s not to say it’s thirsty, though: MPG in the high 40s or low 50s is within easy reach beyond city limits.

Although we had some bones to pick with the unsettled ride of the new GTI on UK roads, there’s no such issue here. Granted, only Golfs with 148bhp or more benefit from the more capable multi-link rear axle set-up, but even with the torsion beam here, it’s notably more absorbent at lower speeds than the equivalent Leon.

We suspect the 16in wheels and chunky tyre sidewalls play a core role here, and the all-speeds suppleness does mean a less direct feel to the steering and more initial body lean. The Leon has the legs in terms of it feeling sharper and more connected to the road surface, and a Ford Focus offers a slightly broader dynamic spread between comfort and driver appeal.

Inside, the infotainment functions and assist tech are broadly similar to the rest of the range's. That means a dashboard design that, while glossy and attractively minimalist, has traded in a good deal of ergonomic simplicity from the old model. However, you get accustomed to working with it and there’s no denying that the splashes of metal-effect plastic and strips of ambient lighting on the dash and doors make the innards look and feel classier than pretty much any new car at this price point. It’s roomy and versatile, too, but the Octavia excels more in that respect. 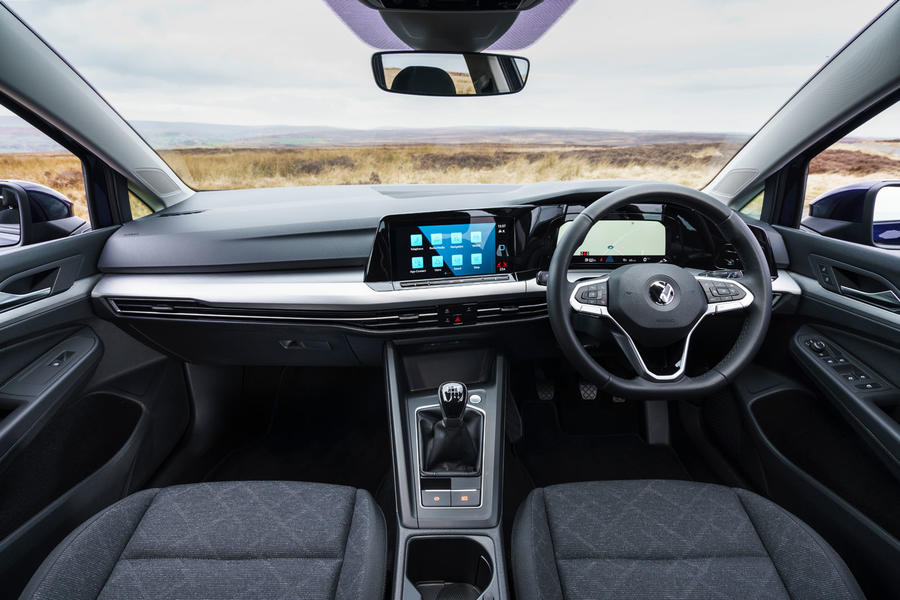 For buyers with an aversion to paying extra for glitzy styling additions, needless equipment and more power than they’ll ever use - and I’m sure they exist in their droves - the Golf Life is a worthy buy that feels far more mid-spec than entry-level.

But we suspect there’s a slightly happier balance of price and capability here. Style spec (around £2000 more, a figure much more easily digestible in monthly payment terms, given the higher-spec car's better residuals) isn’t overloaded with extra gizmos. Rather, the material and upholstery choices are that bit classier and more in keeping with the Golf’s upmarket vibe.

It’s the same story with the engine. Frugal, quiet and rarely underpowered it may be, but many will still miss the satisfaction of not having to use full throttle on so many occasions and having plentiful overtaking punch in reserve. The excellent 1.5 TSI motor doesn’t sacrifice much fuel efficiency while doing just that. 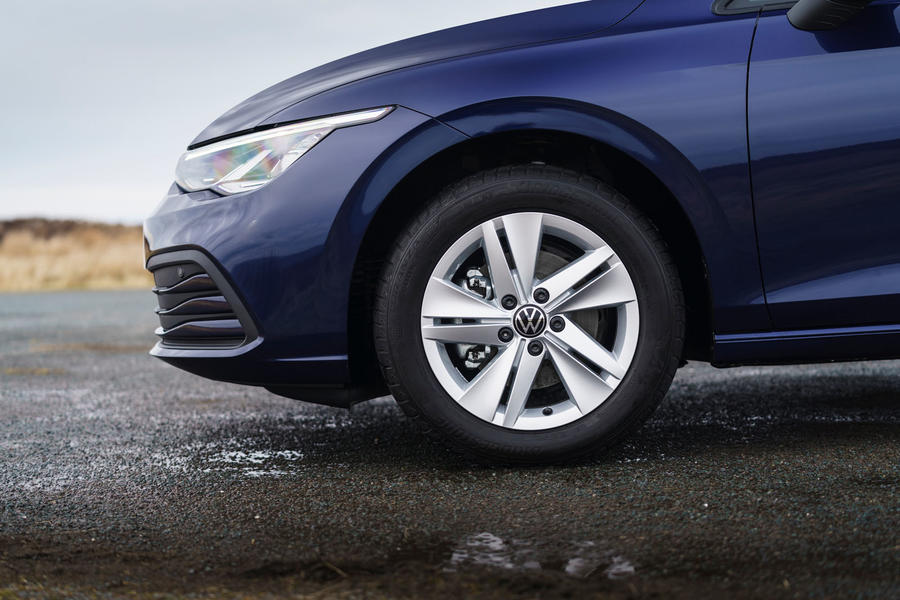 Interesting that they recommend the 1.5 petrol engine......still lots of feedback showing the mis-fire issue is still affecting cars after the software patch.  Search HonestJohn's website and you'll find owners complaining about mis-fires still

Agree with other comments on here. The lack of buttons and knobs and pointing drivers to trying to use the touchscreen whilst driving is complete insanity. As I alluded to on the GTD review comments section, I do NOT like the profile of this car, especially in the non-sporty versions like this one. I see this one as tested was 25k!! Lost for words.

lightbody 24 November 2020
I can't help but feel that the type of person who'd want a basic golf, would also want a heater knob...

Utter madness to remove physical controls that allow you to adjust things so easily.

Autocar should be calling manufacturers out for removing controls and replacing them with ultra cheap screens.

I can't help but feel that the type of person who'd want a basic golf, would also want a heater knob... Utter madness to remove physical controls that allow you to adjust things so easily. Autocar should be calling manufacturers out for removing controls and replacing them with ultra cheap screens.

Autocar dont live in the real world any more, they never call out deal breaking things like this. The ONLY REASON switches have disappeared because it is cheaper for VW to buy an all in one unit from Slovakia instead of having individual switches, it also increases production line speed requiring less people to build the car. Again this is great for VAG bean counters but WE the consumer get screwed when we pay MORE but get less quality and usability . My advice is STOP being hive minded and buy elsewhere It is extra disgusting when a base version gutless family hatchback golf is £24k when 20 years ago the equivalent golf sold for £9999..

The Mark IV measures 4148mm - so it is 15cm shorter, or almost exactly halfway between a modern polo and a golf in size.

Also the modern 'base' car comes with a lot more kit that would only have been standard on a higher, spec Golf, e.g it is a 6 speed not a 5 speed, even air-con was probably a cost option on a base car in 1999.

So comparing the two is not fair this is a larger, faster better equipped car.

You really need to do some statistical analysis, looking at the average premium between the Polo and the Golf, the extra cost premium in 1999 for the more powerful engine and the extra cost of those options, adjust for inflation and compare that. This is what the ONS do in a very sophisticated way, to calculate inflation and have consistently found that the real cost of cars is falling.